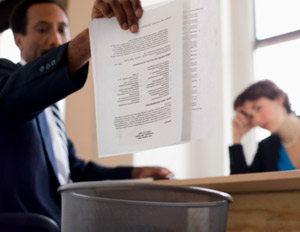 As we continue to get settled into the New Year, many of us are eager to cross off the professional goals we’ve set out to achieve on our vision boards. Whether it be a new job, a complete career switch, or simply gaining full-time employment, the start of a new year tends to spark a desire for change not only in our personal life, but our professional life as well.

With the submission of our rÃ©sumÃ© serving as the first introduction to an employer, Deborah Manning, senior partner of the Human Resource Search Division at Lucas Group, a recruitment firm, offers three rÃ©sumÃ© myths job seekers should avoid in 2015.

Myth No. 1: Your rÃ©sumÃ© must not exceed one page. According to Manning, a one page rÃ©sumÃ© will not do justice to any professional who has years of work experience. “It’s not going to give you an opportunity to talk about your accomplishments, achievements and how you’ve added value,â€ says Manning, who suggest your rÃ©sumÃ© can be more than one page, but no longer than three. Adding that many employers have computers read incoming rÃ©sumÃ©s before human eyes do, Manning says it’s important to ensure you have enough room to include the necessary skills that the job ask for because the computer is taking into account key words before they decide whether a rÃ©sumÃ© will be passed to the next hiring phase.

Myth No. 3: Never include a gap in employment. According to Manning, having a gap of employment in your rÃ©sumÃ© does not move you to the bottom of the selection pool if you explain why your gap exists. “Explain what you did from your last job until now. You are giving that employer an explanation of what’s been going on in your life versus having them wonder where you’ve been for five months, one year or two years,â€ Manning says. She suggests being honest on your rÃ©sumÃ© and explaining the certification you’ve earned, the efforts you took to go back to school or the sabbatical you took to travel the world so that the employer isn’t left guessing about your professional gap.