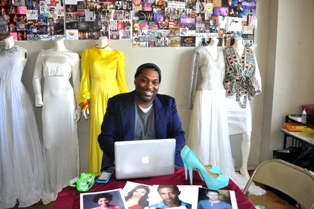 Tai Chunn has been in the fashion, music, and entertainment fields for more than 20 years. He is the founder of MVC Management Productions, a full-service backstage fashion show production company. The 41-year-old Chunn has coordinated backstage operations–making sure models were dressed, their hair done, and their makeup flawless–from the Victoria’s Secret Fashion Show to BET’s Rip the Runway to New York Fashion Week. He has worked with top fashion designers, such as Dianne Von Furstenberg and Tracy Reese.

In 2012, MVC made his market as an all-African American-owned and -operated production company to present at Mercedes-Benz Fashion Week, in Lincoln Center. Chunn created a landmark event with the debut of a clothing collection from Nina Skarra, a Scandinavian designer he discovered through a Norwegian-based fashion representative.

“I was elated to be able to bring this unique twist,â€ says Chunn, who recognized a lack of Scandinavian designers within the U.S. fashion industry after reading an article in Harper’s Bazaar. “It was the first time that Mercedes-Benz Fashion Week has ever had a Scandinavian designer, not to mention Nina Skarra uses eco-friendly materials.â€

That move put MVC back on the map after Chunn had to resurrect the business following a personal tragedy in 2005 and an inhospitable economy between 2008 and 2010. “Between 1995 and 2005 we were making really good money,â€ says Chunn. However, he was forced to take a hiatus in 2005 after being stabbed by a stalker following an industry event that left him unable to walk and out of work.

“In this industry after six months you’re done, and I was out for almost a year. So, I had to reinvent myself. All the people that I knew and worked with had moved on or up into new positions,â€ he explains. But with “my reinvention came the real birth of MVC as it is today.â€

Part of that rebirth involves Chunn growing the business into what is now a multifaceted entertainment enterprise. For instance, MVC is currently producing a television pilot, Call Me, about the secret world of the male escort business. Chunn, who wrote and directed the one-hour drama series, is shopping it around to the networks.

“I wrote Call Me seven years ago and recently shot the promo and sizzle reel of the series, which is in production. Â The Call Me trailer premiered in New York at the industry event, “Black Enterprise Presents An Evening With Tai Chunn,â€ celebrating the September 2014 cover with Hollywood Producer Powerhouse Will Packer.

Unbent and unbowed by hardships, Chunn learned how to adapt and adopt new ways of generating business. He garnered clients through personal contacts, including getting an introduction to a then up-and-coming designer, Donna Karan, back when he was handling special events for Catholic Charities.Â  Through a personal connection he also landed work with The Ground Crew, the fashion industry’s first backstage management company run by Harlem-born legend Audrey Smaltz. Chunn’s first show under Smaltz was for Oscar De la Renta in 2006.

Today, Chunn is constantly scouting for fresh and creative independent talent for the runway. Earlier this year he premiered black British designer Chantell Walters at Mercedes-Benz Fashion Week in New York. “I go everywhere from Midwest Fashion Week to Little Rock Arkansas Fashion Week,â€ Chunn says. “I look for that diamond in the rough.â€

The key to business longevity is being able to constantly snag new clients. The Fashionista offers the following advice for soliciting new business: