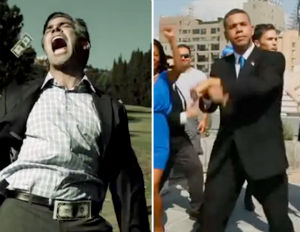 Once YouTube hit the scene, you immediately knew spoof videos of major celebrities, political figures and other notables were bound to be created, right?

Well, that’s exactly what happened and some of the funniest videos have been created in the last 4 years since President Obama’s election to office.

A host of Obama look-a-likes have taken it upon themselves to make parodies of some of the president’s biggest speeches over Hip-Hop beats. As for his opponent, Mitt Romney, they’ve done the same playing on his 47 percent comment and other press-worthy quips by the former Massachusetts governor.

Check out the 5 best President Obama and Mitt Romney spoof videos below:

This clever spoof video takes one of Jay-Z’s more popular songs and carefully, as far as lyrically, matches the swag and bravado Shawn Carter raps in his own video.

Even the video was shot like the typical rap video these days.

Saturday Night Live does an excellent spoof about the speech in which Mitt Romney claims that 47% of voters in American won’t vote for him. Instead of being cryptic, in this video, the actor portraying Romney is more direct in who he is talking about, as far as the 47%.

“When I say ‘These people,’ I mean black people.â€

They also spoof the commentators of FOX News, in this video.

Spoofing the popular children’s show, Mister Roger’s Neighborhood, Jimmy Fallon portrays Mitt Romney. In this clip, even the ‘president’ makes an appearance as Fallon takes advantage of some of Romney’s miscues. Even going so far as making the set look very realistic to the PBS set.

Kudos again to the writers of Saturday Night Live for their version of the first presidential debate. The actors portraying Obama and Romney have the candidates spot on. But what makes this clip funny is the Obama impersonator shown daydreaming instead of actually paying attention to the debate.

This Jay Leno clip spoofs the ‘Call Me Maybe’ car dance being done by Mitt Romney and Barack Obama.

The way this video was edited, the actual faces of the candidates were used.