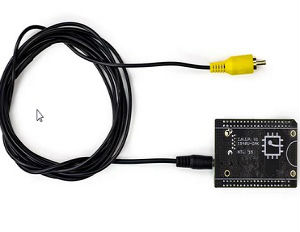 The $9 computer is known as C.H.I.P. a Raspberry Pi-based motherboard that can be connected to peripheral devices such as a keyboard and monitor, as well as the Internet via Wi-Fi, according to USA Today.

The device is produced by Oakland, Calif.-based Next Thing Co., and is about the size of a deck of cards and can also connect to devices via Bluetooth. And along with its 4 gigabytes of storage, it has a 1 gigahertz processor and 512 RAM, making it a fairly powerful device in a very small package.

What’s more, in a video on its Kickstarter site, the chip can actually be inserted into a small, tablet-looking device and utilized in yet another way. “C.H.I.P. is designed to work with any screen. Old or new. Big or small,â€ the site reads, which also notes that C.H.I.P. has a built-in composite output and that it can output in either video graphics array or high-definition multimedia interface display.

In fact, the site also demonstrates the board–hooked up to an array of screens and keyboards–executing a number of activities, from coding, to filling in a spreadsheet, to surfing the Web, to playing video games. It makes it quite tempting to not give up the computer for a tablet.

The multitude of uses seems to play into the message that “C.H.I.P. is a computer for students, teachers, grandparents, children, artists, makers, hackers, and inventors. Everyone really. C.H.I.P. is a great way to add a computer to your life and the perfect way to power your computer based projects,â€ according to the Kickstarter.

With so many niches served, it’s no wonder the Kickstarter campaign has already surpassed its goal on its quest to be a low-cost computer. And much like the One Laptop Per Child initiative, C.H.I.P. seems like another way to get devices into the hands of those who may have trouble affording them.