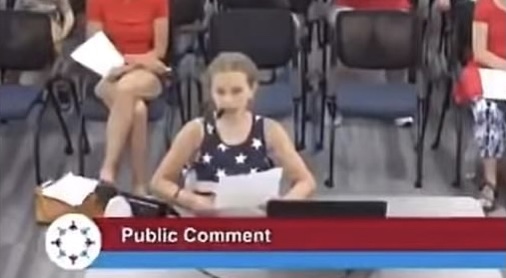 A 9-year-old white girl turned into a viral sensation this week with her passionate speech against all the Black Lives Matter posters on display inside of her school.

While Black lives do matter, the girl, who is only identified as Novalee, complained to her Minnesota school board about the Black Lives Matter posters staying up despite her school’s “no politics” policy, NY Post reports.

The young student brought attention to what she feels is a double standard centered around the school district’s policy and the BLM and Amanda Gorman posters she sees on display at her school.

“I do not judge people by the color of their skin. I don’t really care what color their hair, skin, or eyes is. I judge by the way they treat me. I do not care or look at the color of skin, but you make me think of it.” Novalee told the Lakeville Area School Board.

The meeting took place on June 8, but the video of Novalee’s speech has just started to make rounds on social media.

“The other day I was walking down the hallway at Lakeview Elementary School to give a teacher a retiring gift,” Novalee said in the video shared by News 4 Antonio. “I looked up onto the wall and saw a BLM poster and an Amanda Gorman poster.”

“In case you don’t know who that chick is, she’s some girl who did a poem at Biden’s so-called inauguration,” she continued. “I was so mad. I was told two weeks ago at this very meeting spot: no politics in school. I believed what you said at this meeting.”

After telling her principal that she wanted the posters taken down, she was told they could not be removed since the school board put them up, News 18 reports.

“It is a political message about getting rid of police officers, rioting, burning buildings down,” she said before calling out Minnesota Governor Tim Walz who she said “just sits on his throne and watches.”

“You expect me to believe that you did not know what you were doing by making these posters? Come on, people,” Novalee quipped.

She ended her speech by telling the board that they lied to her, “and I am very disappointed in all of you,” she added.