A Closer Look At the Message Behind Gov. Nikki Haley's State of the Union Rebuttal 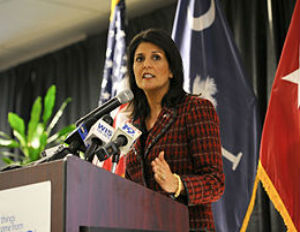 If you haven’t already heard of South Carolina Governor Nikki Haley, you certainly will now. Last night Gov. Haley gave the GOP’s rebuttal of President Obama’s final State of the Union address. Judging by the reactions thus far, her speech resonated with both Republicans and Democrats who have grown weary of the hyper-partisan back and forth plaguing Washington.

Usually the State of the Union response is reserved soley for rebutting the points made in the president’s address. Haley had no problem in that arena, delivering a scathing, critique of the Obama administration. Citing “crushing national debt, a healthcare plan that has made insurance less available, and chaotic unrest in many of our cities” as examples of how President Obama has failed America, she urged viewers to look forward to an Obama-free future.

However, it was her thinly-veiled condemnation of Donald Trump that drew mass acclaim from viewers, the media, and her fellow elected officials — on both sides of the aisle.

At first glance, Nikki Haley may seem like a typical GOP politician. She is a fiscally-conservative, pro-life, southern, military wife. However, Haley is also the daughter of Indian immigrants. She has converted to Christianity but still attends the Sikh services she grew up with. She chose to give her children Indian names, which is why herÂ Â condemnation of Trump’s radically parochial language rang true; it was authentic.

Haley spoke of her childhood “growing up in the rural south” where her Indian family “didn’t look like our neighbors and didn’t have much.” She then reminded viewers that her story is no different from the other countless tales of immigrant families diligently working for their chance at the American Dream.

Nikki Haley is a walking, breathing contradiction of the asinine broadsides Trump has been assaulting this country with. She grew up as a religious and ethnic minority and can therefore authentically speak to the dangers of following ‘the siren call of the angriest voices.’

Before wrapping up her speech, Haley delivered a tactful, final blow to the hateful rhetoric of the Trump campaign:

“Some people think that you have to be the loudest voice in the room to make a difference. That is just not true. Often, the best thing we can do is turn down the volume. When the sound is quieter, you can actually hear what someone else is saying. And that can make a world of difference.”