A Day in the Life of US Army Basic Training 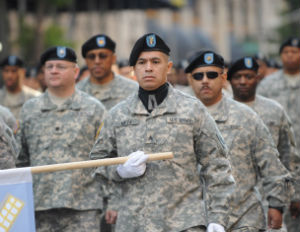 Surviving army basic training is no easy feat. The intense 10-week course, generally includes learning the basic skills of being a solider, physical skills of combat, how to wear your hair and uniform, and examining your physical and mental endurance. In a nutshell, it’s meant to transform you from a civilian to a soldier.

“Want to know what it’s like to be in the army? Try standing in one place, ramrod straight and perfectly still. If a mosquito bites you, don’t slap it. If sweat rolls into your eye, don’t wipe it away. And if you scratch your thigh, do 20 push-ups and jump back into position,â€ said Frank Pellegrini during an interview with theÂ Time Magazine series about army boot camp.

However, beyond testing your skills and abilities, the army’s seven core values are drilled into your psyche–loyalty, duty, respect, selfless service, honor, integrity and personal courage.Â  By the end of basic-training you should have the core values memorized, and ultimately use these values every day as a guide to your problem-solving and decision-making.

If you’ve ever wondered what’s it like to go through army basic-training, watch the video below.