A Founder of the Eagle Academy Foundation Is Honored 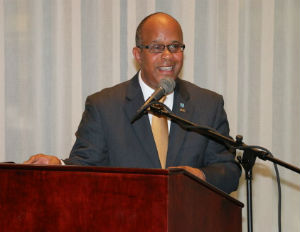 Last month at a gala celebration, Paul Williams, former president and CEO of DASNY (New York state’s facilities finance and construction authority) under Gov. David Paterson and then Gov. Andrew Cuomo, was honored and feted for his outstanding leadership and public service to the state and his work in founding and supporting the Eagle Academy Foundation. Friends and supporters of Williams, knowing his passion for the foundation’s work, named a fund supporting the foundation in his honor: the Paul T. Williams Legacy Fund. Each year, the fund will sponsor at least 100 Eagle Scholars.

“I’m translating the great relationships and network I’ve built up during my professional career to help support a passion I’ve had for 15 years now, in helping to be one of the folks who develop and initiate a terrific innovative model dealing with the education of boys of color in urban settings,â€ Williams says.

A former president of 100 Black Men of New York, Williams and a group within the organization discussed the abysmal state of public education for black boys in New York. But Williams recognized that the time for talking was over–it was now time to act.

The group wanted to “have a legacy of effectiveness and of implementing something that really made a difference.â€ There are now six Eagle Academy schools affecting the lives of 2,400 families. “When the schools are at full operation there will be 4,000 students and their families that we’ll be impacting every day, so that’s the legacy I’m trying to continue to support now, in a different way, by demonstrating to myself, to my family as well as to the community at large, that charity relationships and business make sense. And that’s one way that we can support our own initiatives like the Eagle Academy Foundation.â€