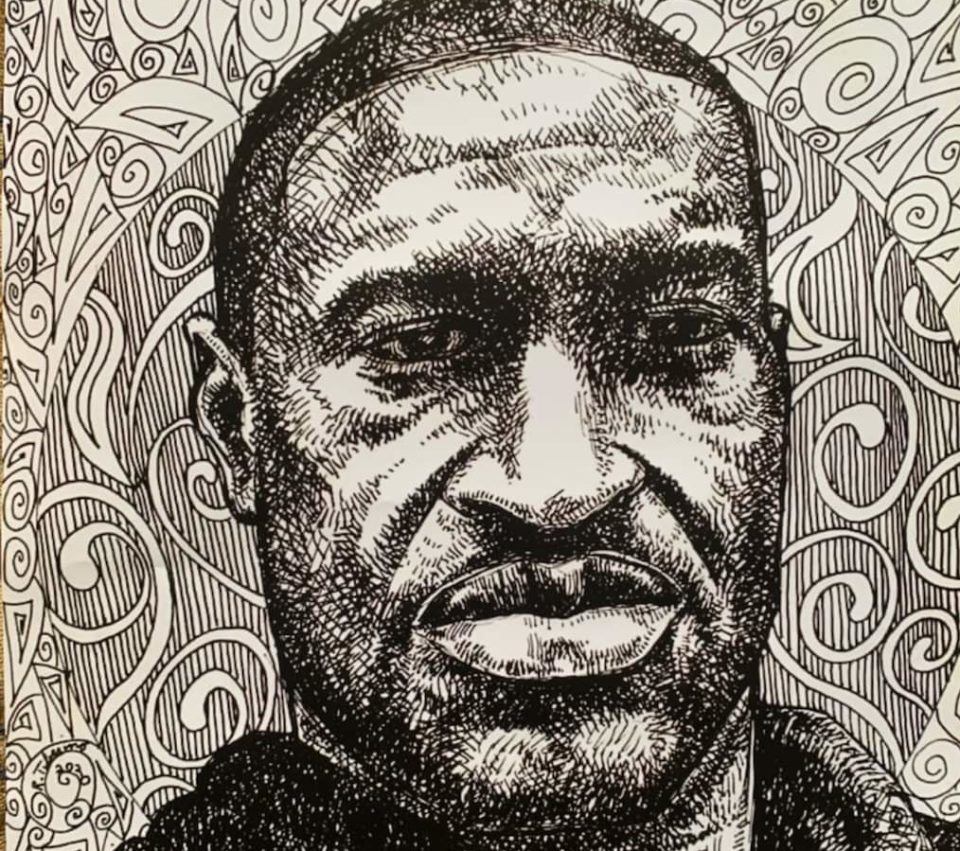 Sadly, the 25th of May marks the one-year anniversary of George Floyd’s death at the hands of an ornery, ego-driven Minneapolis cop, Derek Chauvin. The killing was captured by cellphone and shared across social and mass media, and was the catalyst for national and global communities to protest against police brutality and racial violence. On this day, across Black communities Floyd remains on our minds and in our hearts.

However, this sentiment is not held by other individuals and it shows; particularly when it comes to honorific art that celebrates Floyd’s life and spirit. Just last week BLACK ENTERPRISE reported that a “violent white man axed a George Floyd memorial” in a fit of white rage.

—And in the wake of Derek Chauvin’s guilty verdict for the second-degree unintentional murder, third-degree murder and second-degree manslaughter of George Floyd, some people are finding it hard to deal.

A mural dedicated to Floyd, in his hometown of Houston, has been defaced.

According to thegrio, the hateful words, “niggers lives don’t matter” was spray painted across the face of the large scale painting that beared Floyd’s likeness.

The mural, located in downtown Houston on Chartres and Bell street, was painted by Daniel Anguilu to lift community spirits. The mural had been targeted, vandalized and restored by Anguilu twice before. In a previous incident, someone scribbled “KKK” on the painting’s face.

A mural in Phoenix, Arizona, that also paid homage to Floyd was vandalized in early April, BLACK ENTERPRISE reported. The eyes and mouth of the painting were crossed out with the letter “x” and the words “Fentanyl” was sketched across its subject’s forehead.

Black people stay putting their best foot forward and continue to lead with the Blackest of excellence, in spite of racism in most situations. The Black art community exemplifies this notion. Here are six Black works of art that center George Floyd, and their own brand of activism.

Palmer is an exemplary painter whose artwork, for the most part is situated at the intersection of Blackness and activism. His 2020 TIME magazine cover is a testament to that, but so is this commission piece that hollers for criminal justice reform. It features 14-year-old George Stinney, who to-date, is the youngest person to be executed in the United States. His image is embedded in a copper penny that eerily examines how much the Black body is worth; Colin Kaepeenick kneels. Not on a football field but the asphalt in the hood, which at times is a battlefield; and at the center of it all Floyd outfitted as a warrior.

Williams is a muralist who is quite familiar with the defacement of public art, particularly art that is political and bears Black faces. He’s known for creating honorific murals of Black icons in and around metropolitan Atlanta. He has painted Stacey Abrams, Kaepernick, Rep. John Lewis, but it was his mural of Martin Luther King that was vandalized numerous times. Williams’s Floyd piece is a critique and an indictment of the U.S. justice department and state-sanctioned violence.

Blackstone, a Minneapolis teenager and 2019 Human Rights Award Nominee, uses her art and advocacy to raise money and bring awareness to social justice issues. Blackstone’s winged portrait depicted Floyd as an angel. The drawing she created was sold as part of a GoFundMe, part of the proceeds were donated to the Floyd family. The image was also turned into tapestry and used as a casket cover during Floyd’s memorial and funeral service.

Representation is a form of activism, and Goldigold is an activist in that vein. The artist’s portraiture work is committed to representing full-bodied Blackness. Goldigold uses a bold color pallet to amplify around the way girls and guys, the common folk who are superheros, and musical geniuses. The artist’s rendering of George Floyd falls in line with that sentiment, but also reflects an unresolved, topical issue in Black communities: police-killings and violence against Black bodies.

Philly artist and educator, Raphael Tiberino has been an artist for over two decaded, creating dope art across mediums and genres including comics. Tiberino inked this incredible George Floyd piece with a pen and it is nothing short of breathtaking.

Austin, a North Carolina gallerist and artist paints with purpose: in the name of social justice. “Bloodline of Injustice,” the George Floyd painting she created went viral on Instagram and continues to gain attention.