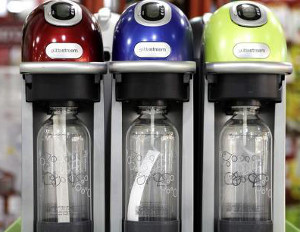 SodaStream’s original commercial was rejected by the Super Bowl ad committee due to explicit content. The racy content wasn’t a naked woman, guns or obscene behavior. Rather it was the image of Coca-Cola and Pepsi bottles exploding, leaving only SodaStream standing at the end of the commercial.

What is SodaStream? It’s a simple device that shoots CO2 into liquids, allowing the user to create their own carbonated beverages.Â  The company also sells syrups so you can add flavor to beverages, eliminating the need to purchase soft drinks.Â  “SodaStream empowers consumers to make their own fresh soda at home in seconds, without the devastating environmental impact of plastic soda bottles and cans, which litter our parks and oceans,â€ says a statement from SodaStream International.

Why would a small company take such a big risk, especially advertising during the Super Bowl with a provocative ad that almost got banned? The answer is SodaStream is a real business and has recently made deals with big home-goods retailers like Williams-Sonoma. In its most recent quarter, the company posted a revenue that rose 49 percent from the year before, as well as their profit increasing 65 percent.

Also the added publicity of having a commercial banned from the Super Bowl leads to word of mouth advertising, along with possible viral traffic. This small company still has plans to release the original commercial online and elsewhere on television.