Teacher Amy Donofrio Is Hitting Back After Her District Suspended Her 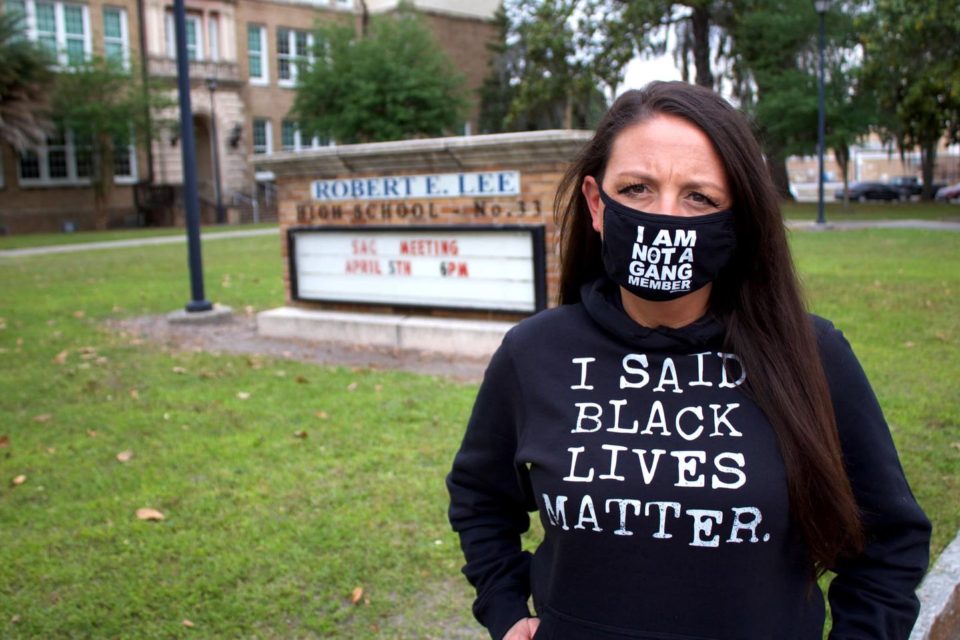 Florida teacher Amy Donofrio, who was suspended in March for refusing to remove a Black Lives Matter sign outside her classroom is now taking the district to court.

Donofrio, a teacher at the ironically-named Robert E. Lee High School in Jacksonville, Florida, is being represented by the Southern Poverty Law Center in a lawsuit filed in the U.S. District Court for the Middle District of Florida.

The suit alleges the flag’s removal was a violation of her First Amendment rights. Donofrio initially put the sign outside her classroom in the fall of 2020 after Reginald Boston was killed in January 2020 by members of the Jacksonville Sheriff’s Office.

Boston was a former member of the EVAC Movement, which focused on reframing the youth in Jacksonville from “at risk” to “at hope.”

The language arts teacher used her flags to demonstrate her opposition to the Civil War general who owned slaves. Donofrio also live streams her protests, some of which have gone viral on Twitter.

In March, the Jacksonville Public School District told Donofrio to take her flag down as it violated a district policy concerning political speech by employees.

Donofrio told BLACK ENTERPRISE in an emailed interview she asked the district for an applicable policy but the district could not provide one.

“And here’s the thing: it was our flag. Me and my students. And I knew what it meant to them. They’re processing these racially tumultuous times, and to remove a symbol of their humanity and safety, for a non-policy-based reason, right after our school had a meeting to debate whether or not the leader of the Confederacy appropriately represented them…no. That’s wrong,” Donofrio said. “Why didn’t I remove it? Because we in education constantly lecture kids to do the right thing, even when it may cost them, and we have an obligation to walk that out ourselves.”

In addition to violating her rights, the English teacher said the school district constantly undermined the EVAC Movement, demoting it from a class to a club to an informal group. The district also turned down private funding for the program and blocked her from taking students on field trips during non-teaching days.

“My students and I have presented at the White House, Capitol Hill, Harvard, on four occasions, and given a TED talk. Last year, we became published authors by Harvard. To see all that not be celebrated but fiercely targeted and labeled “problematic,” is deeply painful—like a slap in the face,” Donofrio told BE. “My students don’t deserve this treatment. As a white woman, glimpsing the depths of racism in these same systems that are supposed to protect and elevate them, it’s paradigm crushing.”

Donofrio is expected to face an uphill battle in court, but she’s more concerned about how her actions make her students feel, “Like they matter, because they do.”