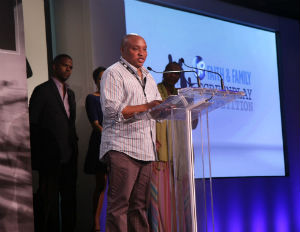 At the 2014 American Black Film Festival, writer Christopher Brandt won the screenplay competition for his original script, Island in the Sun, now titledÂ Runaway Island. Runaway Island is a story about troubled strangers trying to escape their woes and wind up sharing a transformational experience on an island, enriched with African American heritage and culture.

Most recently, it was announced that Brandt’s Runaway Island will air on TV One. “As this year’s sponsor of the 2015 American Black Film Festival’s screenplay competition, we are honored to bring Christopher Brandt’s award-winning script to life,” TV One President Brad Siegel says in an official statement. “We are dedicated to helping launch the careers of future Black content creators and artists by providing them with a platform to showcase their talents. Runaway Island is the perfect vehicle in which to highlight the incredible, young talent in the Black creative community.”

Lara Cook-Nordholm (Hinds) and Erick Nordholm (Branton Box, The Purge: Anarchy) are a “unique interracial couple” running Isle du Soleil, a secluded 1700s Gullah Sea Island resort. It is there where the island visitors examine their relationship strengths and weaknesses and personal insecurities. Eventually, they renew their love for each other.