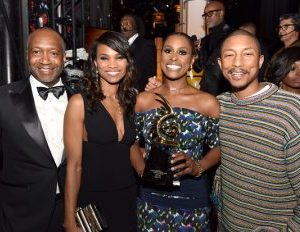 The who’s who of Hollywood will be in full effect on Wednesday, Feb. 22 at the 2017 BET Presents: ABFF Honors, hosted by the incredibly entertaining Regina Hall. Everyone from Denzel Washington, who will be presented with the Hollywood Legacy Award for his undeniable contribution to the arts, to Queen Latifah, who will receive the Icon Honoree Award for her consistent list of ever-growing accolades, will be there.

Other honorees include F. Gary Gray and Terrence Howard, both being honored for the Excellence in the Arts Awards, but, it should be noted, for very different reasons. Gray for his incredible roster of directing projects and Howard for his ability to integrate his musical genius into his current roles.

But for me, the standout of the Honorees for the evening is Issa Rae, presented with the Rising Star Award. Why? Because she used technology to hack Hollywood. While each of her counterparts took the traditional route, hustle, intermixed with a bit of timing, allowed Rae to do something new and innovative.

Long gone are the days of being discovered or looking for an agent to book you gigs. In this modern day and age, if you want it, you have to create it yourself and that is what she did. With the creation of Awkward Black Girl, she propelled her web series into the success of what is now known as the popular HBO television series, Insecure. She carved out a niche that had been virtually unrepresented on the television screen but, extraordinarily prominent in the African American community, causing millions of viewers to tune in. HBO has already ordered Season 2 and Rae is well on her way. Â

Watch the acceptance speeches from all of these incredible Honorees, including performances from Maxwell, Dionne Farris, and fan favorites, the cast ofÂ The New Edition Story. Also, tune in to find out who won Television Show and Movie of the year this Wednesday, Feb. 22 at 8P/7CÂ on BET.