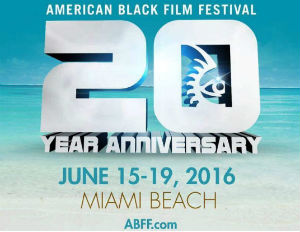 Today, June 15, kicks off fiveÂ days of films, masters classes, networking, and possibility at the 20th anniversary of the American Black Film Festival.

Hosted on South Beach Miami, Florida, this festival annually proves to be the premier event for content creators of color to come together in hopes of sharing, inspiring, and making a difference in the film and television industry. This year will continue to exceed all expectations.
Attendees arriving to the festival today can head over to the Loews Hotel, 1601 Collins Ave., to enjoy the Power Lounge, hosted by Cadillac, where there will be a celebrity meet-and-greet with actor David Ramsey at 4 p.m.

The screening will be followed by an opening night party, from 11:00 p.m.—3:00 a.m., at one of Miami’s hottest nightclubs, STORY, to celebrate 20 years of ABFF with DJ D-Nice. The who’s who of black Hollywood will be in Miami for this one!

Try not to party too hard as the festival continues tomorrow with a full day of events including an Actors Boot Camp with instructor Bill Duke where you can sharpen your acting skills in this intensive two-day class on the business and craft of acting through scene study and lively discussion, and a full day (11:00 a.m.—11:00 p.m.) of narrative feature and documentary films at the Regal Cinemas (Screens 17 & 18), 1120 Lincoln Rd.

At noon tomorrow, attendees will enjoy A Conversation with Common where the Oscar-winning recording artist, multi-Grammy Award winner and actorÂ will host a dynamic discussion with moderator Roland S. Martin.

The conversation will be followed by a Spotlight Screening: ABFF Independent, courtesy of ASPiRE where Grammy Award-winning music producer, recording artist and actor, David Banner, will host the season premiere of ASPiRE’s popular original series that presents the best of independent shorts and docs from emerging African American artists.

This is followed by the Spotlight Screening: Angie Tribeca where you may preview a brand new episode of Angie Tribeca alongside one of the show’s star, Deon Cole, who will participate in a discussion following the screening.

This is only Day 1 and there is already so much to take advantage of. It’s time to dive in.

To purchase passes and tickets for events, panels, screenings, or to view the full schedule for the American Black Film Festival, log on to www.ABFF.com.

Follow #ABFF20, #ABFFBackToTheBeach; @ABFF to remain in the loop.