Inside the Oval Office with President Obama 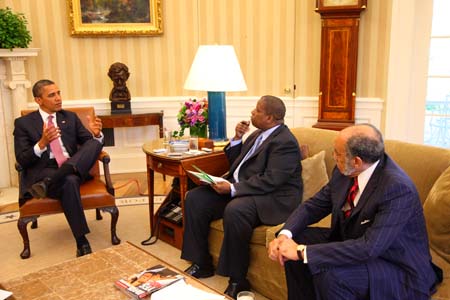 It was the call I’ve been waiting for my entire career. “Derek, you have your 20 minutes with the president in the Oval Office,â€ Kevin Lewis, White House director of African American Media, told me. Although I have interviewed the president on two previous occasions during the past three and a half years, I would conduct this face-to-face session in the ultimate seat of global power.

The interview was set for 1:40 p.m. For our momentous meeting, I was joined by Black Enterprise Publisher Earl G. Graves Sr. and Photography Director Lonnie C. Major, who would have the rare opportunity to take photos of the president in his power suite. We arrived 45 minutes early at the south entrance gate to receive our “day passâ€ for national and regional media courtesy of the “Comm Shopâ€–Washington parlance for the White House communications team.

Wearing our distinctive red press passes around our necks, we walked down a winding sidewalk, passing “Pebble Beach,â€ the gravel-strewn spot for TV cameras to take live shots, to the press briefing room, where more than 200 reporters and 60 regular correspondents receive daily details of White House activities. Waiting to be directed to the West Wing, we watched Press Secretary Jay Carney share details to our media brethren of the administration’s response to the latest developments in Syria, objectives of a presidential trip to South America, and the ongoing battle with GOP lawmakers over the “Buffett Rule,â€ the president’s attempt to impose a 30% tax on millionaires’ income.

In the West Wing Lobby, a receiving room with several paintings from the White House collection and a 1770 mahogany bookcase, we witnessed a blur of assistants gathering information and materials for POTUS, the shorthand reference used by White House staffers. As one high-level meeting ended–we quickly met attendees Education Secretary Arne Duncan and former Secretary of State Colin Powell, among others–it was our turn to meet with the president.

Crossing its threshold, you can’t help but be captivated by the power emanating from the planet’s greatest home court advantage. I’ve been told the Oval Office reflects the core values of its occupant, and the elegance and intention of its current design conveyed much about Barack Obama. Positioned at the far end of the room sat the iconic HMS Resolute desk that dates back 130 years to President Rutherford B. Hayes and has been used by every president since John F. Kennedy. Among the other elements that offer grounding and inspiration: photos of the First Family adjacent to his desk; busts of heroes Abraham Lincoln and Martin Luther King Jr. near the seating area; and the wheat-colored carpet complete with the presidential seal in the center and quotes of courage and determination from Franklin D. Roosevelt, Theodore Roosevelt, Lincoln, Kennedy, and King along its border. It is here that he has weighed his toughest decisions and also engaged in his most solemn acts, such as writing letters to family members who lost loved ones in the Iraq and Afghanistan wars.

He welcomed us with a mix of cordial warmth and presidential cool. His senior advisor and most trusted confidante, Valerie Jarrett, also offered a greeting. He smiled broadly when we presented him with copies of four issues in which he appeared on the cover: October 2004, January 2008, November 2008, and March 2009. “I sure have gotten gray,â€ he joked, before sharing his admiration for our publisher, a long-time Obama supporter and surrogate during his 2008 campaign: “It wouldn’t have happened without you. And not just you promoting my campaign, it wouldn’t have happened unless you laid the ground work.â€

I then spent 20 minutes talking to the grayer but still confident and purposeful Obama. Serious in mien and tone, he admitted his administration still has much work to do, but stressed that it wasn’t done yet. In this issue, we share excerpts from that conversation related to strengthening small and minority business as well as use it for the basis on a feature about the impact his policies have had on black business.

As the election heats up, and well past November, Black Enterprise will be there to cover every detail, and share how each policy debate and political battle affects your business, career, and pocketbook.

As you can see, we’re not done yet either.