Adidas Blocked Out of Contracts by College Sports Programs 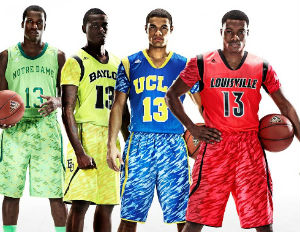 Over the past two years, the brand Adidas has lost numerous amounts of contracts with schools highly involved in college sports. The major sports apparel company had their contracts terminated or suspended by 17 schools to be exact. A sports apparel company that has been a giant for years gets on the bad side of these schools and the only question that would be asked is “what’s the cause?â€

The cause of this issue starts with the closing of a PT Kizone, according to ESPN.

PT Kizone is a factory located in Indonesia that Adidas, Nike and the Dallas Cowboys had a contract with to manufacture their goods. The Workers Right Consortium (WRC) formed a report stating that there were violations at PT Kizone in September of 2010. First, the issue was that PT Kizone failed to make mandatory terminal payments to employees who left the factory. Three months later, the factory failed to make regularly scheduled payments to current employees. After these payment issues came to the surface, it was found that the owner of PT Kizone left Indonesia. Slightly after, Green Textile which was the buying agent for PT Kizone, continued to pay workers until March of 2011. The next month, PT Kizone was founded bankrupt and closed.

Worker rights advocacy groups such as WRC and the United States Against Sweatshops (USAS) claimed that Adidas was refusing to pay $1.8 million legally mandated redundancy money owed to the workers at PT Kizone. In total, the amount owed to workers due to the compliance of the Indonesian work laws was $3.3 million. Nike and the Dallas Cowboys have contributed to the expenses for the past two years owed – but Adidas – continued to not pay off any expenses.