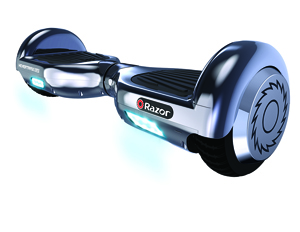 CBS News reports a spike in the number of hoverboard injuries. Videos of people falling off the transportation gadgets have gone viral during the holidays. From CBS:

It’s the gift that keeps on giving, especially for kids who enjoy seeing their parents hop on their hoverboards and find themselves crashing to the ground.

Helmets and kneepads were nowhere in sight, so when many parents went down, it didn’t end well.

A significant portion of the injured were adults taking their kids’ hoverboards for a test run. Kids seem to take to the new gadgets very quickly and gracefully. Adults – not so much.

[RELATED: Caught on Twitter: Wiz Khalifa Restrained at Airport Because of Hoverboard]

Hoverboards (which is more of a misnomer since most have wheels and don’t hover) work more like skateboards. They are self-balancing scooters that require a bit of practice to master.

Nathan Furniss, a hoverboard seller in Los Angeles, told CBS News that adults tend to be overconfident when they first step on the boards.

There has been a 35% increase in hoverboard injuries before the holidays,Â reports the U.S. Consumer Product Safety Commission. A number of boards have also inexplicably caught on fire, prompting the Safety Commission to open an investigation.

“Some of these injuries have been serious, including concussions, fractures, contusions/abrasions, and internal organ injuries,â€ wrote U.S. CPSC chairman Elliot F. Kaye, in a statement about hoverboard accidents.

If you insist on trying your kids’ hoverboard, here are a few tips:

Not the smartest idea hun. pic.twitter.com/69gfm2nbk9