Advocating For Fathers: Men Across The Country Expand Initiative 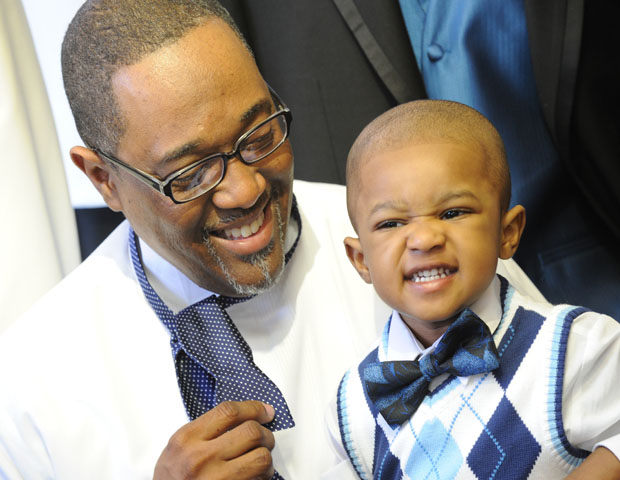 President Barack Obama is using this Father’s Day weekend to spread the word about the joys and responsibilities of being a dad with the Fatherhood Buzz initiative. On Saturday June 16, 100 barbershops in eight citiesÂ  (Albany, NY; Atlanta; Chicago; Los Angeles; Milwaukee; New York City; Philadelphia; and Washington D.C.) will partner with local organizations to “disseminate information about responsible fatherhood and parenting.â€

“The barbershop has always been the hub for gentleman,â€ says Brenda Braxton, owner of BBraxton, a participating barbershop in Harlem. “This is the place where they can speak candidly about the things they care about. For a lot of men in our community, this is their version of the golf course.â€

Kenneth Braswell, director of the National Responsible Fatherhood Clearinghouse (NRFC), agrees with Braxton. “I grew up in Brooklyn in a single parent household.Â  The barbershop is probably the most trusted institution for men.Â  We speak freely there,â€ says Braswell, whose organization is funded by the Office of Family Assistance. “These barbers already know how to facilitate conversations, that’s why we chose this venue, but what we’re doing is arming them with more information and resources to offer their clients.â€

Both Braxton and Braswell cited “baby mama dramaâ€ as a main topic of conversation in barbershops and statistics suggest there are many families impacted by broken homes in this country. According to the U.S. Census Bureau, an estimated 24 million children do not live with their biological fathers.Â  The Children’s Defense Fund notes that fewer than 40% of black children live with both parents. Situations like that can create rockier relationships when it comes to issues such as finances, quality of life and visitation. Organizations like the NRFC exist to offer support in those circumstances.

“We are a repository of information on responsible fatherhood,â€ Braswell says. “We offer online resources that are written in plain English—no legalese. We have a free hotline that parents can call and immediately be linked with the local resources they need to address their particular situation. There is assistance out there. We just need to let people know it’s there.â€

Resources such as those offered by the NRFC help level a playing field saturated with images of fathers that oftentimes amplify what men are doing wrong. “A lot of times the only images people see of black fatherhood are negative ones and that’s not the whole picture,” Braxton says. “There are a lot of our guys doing the right thing.Â  If we can keep going, keep the positive image of black men out there and keep handing out useful information, we’ll be a force to be reckoned with.”

As co-director of Newark’s Fathers Now, Abdul Muhammad is very familiar with the negative stereotype of black fatherhood. Muhammad is a single father of two and a former convict. The Newark native has made use of the resources available to him to make changes in his life Â and has in turn, been put in a position to help fathers trying to find their way to the path of positive manhood and fatherhood.

Oftentimes the subject of child support is a top concern among men who might feel they get a bad rap. Muhammad urges men to see child support not as punishment or a drain, but as a necessary means to appropriately support their children.

He strongly believes in second chances and also advocates for ex-convicts to actively seek out resources to help them reconnect with their children. “Many of the men who participate in our 8-week program are transitioning from prison,” Muhammad says. “They have to get themselves together as men and as members of society, so that they can be strong, stable, loving fathers.â€