In South Africa, the African Cup of Nations Is Big Business 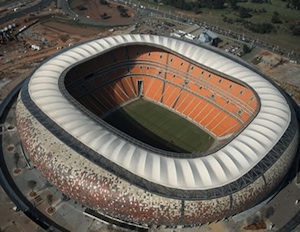 The National Stadium, just outside the township of Soweto in Johannesburg.

The African Cup of Nations kicked off Saturday at Soccer City in Johannesburg, South Africa, with a scoreless draw between the host country and Cape Verde in front of 50,000. The business of the tournament — which switched to odd-numbered years to avoid conflict with the World Cup — brings to the fore some of the most compelling and significant ramifications in the history of the games’ modern era.

The tournament is expected to bring $154 million to South Africa, with the country spending close to $53.3 million on security, logistics and travel services. While stadium building stymied efforts of host countries in past years, the matches will be played in brand new stadiums originally built and renovated for the 2010 World Cup. Some early-round games of the World Cup had thousands of empty seats, but officials say the CAF can curb low attendance and drive late ticket sales.

But as with the World Cup, South Africa is using center stage to make its pitch to tourists.

“For us it’s about the exposure this tournament brings to us beyond football, beyond what other countries know Africa for, which is the safari experience,â€ South African Tourism CEO Thulani Nzima told South Africa’s This Day Live. “There’s another side to our country.â€

But not everyone in line to benefit from South Africa’s arrival as a marquee attraction is impressed. Interestingly, grumblings remain over whether FIFA, the game’s international governing body, undermined South Africa’s World Cup efforts and simply made its money. FIFA took in a whopping $2.6 billion and rising costs directly and indirectly related to overhaul of its infrastructure left many observers wondering if hosting the tournament was even worth it. Most analysts say it will take 5-10 years to accurately survey the 2010 tournament’s impact.

The games’ success are also of concern for small businesses and entrepreneurs. Many were wildly successful during the World Cup and view AFCON as another opportunity — even as cynicism over FIFA’s role lingers.

“For instance, a regular taxi driver told me he did the most business he ever did in his life, but after the people left, tolls increased,â€ said Obinna Nwadike a Houston-area businessman with interests in the U.S. and Africa. “After everybody left there wasn’t that much business, but the roads are better. They trust that the important and wealthy people that saw the country will come back, but it’s a very small consolation.â€

The impact on business doesn’t stop there: South Africa’s SuperSport, known widely as the continent’s ESPN, holds all broadcast rights. The tournament is a boon to brands like Puma, Adidas and Nike who seek to market apparel to consumers of the African Diaspora. The tournament is played by some of the world’s most famous players, including Jon Mikel Obi and Didier Drogba, who have multimillion-dollar deals with Samsung.

But for one of Africa’s wealthiest countries, the tournament underlines the demand for progress.

“AFCON gives us another opportunity to welcome African tourists to South Africa and show them a great time,â€ said Phumi Dhlomo, South Africa’s regional tourism director for African markets. “It gives us an opportunity again to showcase our destination, our welcoming people, our capability and infrastructure not only to the continent, but also to the world.