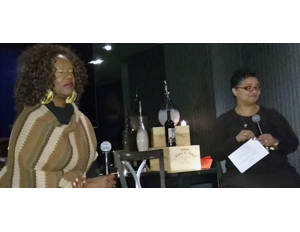 From left to right: Terra Renee and Shelly Jones Jennings

CITE (Consortium of Information and Telecommunications Executives) celebrated the end of Black History Month with a night at world’s famous Morton’s Steakhouse in New York City in an evening that included poetry and engaging discussion.

In attendance were members of CITE–an organization of over 35,000 African American Verizon employees. Hortense Ford, CITE’s Northeast regional director was on hand to open the event and talk about the history of CITE. The group was formed in 1983 after the government broke up the Bell telephone monopoly.

The evening activities began with inspiring spoken word art from poet Alexis Marie. Then, a fireside chat with Terra Renee, the founder and president of African American Women in Cinema; and with Black Enterprise’s own vice president, director of digital, Shelly Jones Jennings, provided a lively discussion on innovation in technology.

Jones-Jennings discussed how digital has changed the world and the privacy concerns living in an always-connected society brings.

“Look, everybody has their phone out. With digital, it’s, ‘How much of our life are we going to give up?’ How much are we going to scale back–how much do we really want [technology] to change our world? You can give yourself up to digital all you want every day, so it’s really up to you,â€ said Jones-Jennings.

Renee spoke of the influence of technology on filmmaking. “Back when I got started in filmmaking we have a machine called the steenbeck. It was used when you would shoot your film on literal film. We had 8, 16, 35 mm….so you would shoot your films at 24 frames per second, you get it developed–one of the top developers at the time was Technicolor–and then you had to get your negatives done through another company. Sound was a whole ‘nother thing!’â€ recalled Renee.

“Once you got your work print, it’s the first development of your actual shot…you put your film on the steenbeck and you go frame by frame…And you sit there, splicing scenes together with splice tape. I did a 7 minute short that took three months to edit. So now, now you can shoot a film on your phone. There’s no film to develop, none of that. The future for filmmakers is bright, just in terms of that, because that knocks off a tremendous amount of money for shooting, editing, sound; all that. The future is bright for independent filmmakers,â€ said Renee.

Jones-Jennings spoke on technology’s influence on publishing and media saying, “digital has become our front door to everything,â€ and that in order for media to “stay relevantâ€ it has to technologically evolve.

She also touched on the roads African Americans still must make in tech. “Africans Americans, minorities overall; we are not disrupting enough; we don’t have enough opportunities, investors…we have great ideas but we don’t have a platform. That’s what Black Enterprise is trying to do–give people platforms to be disruptive.”