African Americans and the Minimum Wage: How It's Affecting Our Community 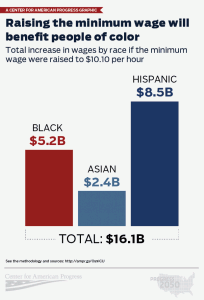 At $7.25 per hour, the current full-time minimum wage worker earns a mere $15,080 in one year. That’s $4,000 below the federal poverty line and that’s a salary that most would agree is not enough to sustain a living anywhere in this country.

While President Obama and the Democratic party have been working to raise the nation’s minimum wage rate to $10.10 per hour, Senate Republicans blocked the legislation Wednesday. Falling short of the 60 votes needed and arguing that increasing minimum wage will only hurt the economy.

However, Democrats are not quick to give up on the issue and yesterday President Obama offered his remarks on the decision and what the American people can do in response.

“If there’s any good news here, it’s that Republicans in Congress don’t get the last word on this or any issue — you do, the American people, the voters,” Obama said in his speech.

RELATED: How Obama Plans to Win His Minimum Wage Campaign

For people of color, the Center for American Progress is reporting that if an increase in minimum wages does take place in the future, the income of blacks, Asians and Hispanics combined will go up by a total of $16.1 billion.

Currently, people of color make up 42 percent of minimum wage earners, even though they’re only 32 percent of the workforce.

According to CAP’s chart above, the income of blacks is expected to increase by $5.2 billion if minimum wage is raised to $10.10. Currently, African Americans suffer from a poverty rate of 25.8 percent, making them one of the highest groups with low-income wages compared to Hispanics who have a rate of 23.2 percent and Asians who have a rate of 11.7 percent.

In an effort to put the pressure on Congress, President Obama is urging Americans to reach out to their local Congress members on twitter using the hashtag #1010Means and explain how raising minimum wage will benefit their family.