Africans In China Say Government Is Forcing Them To Recant Stories 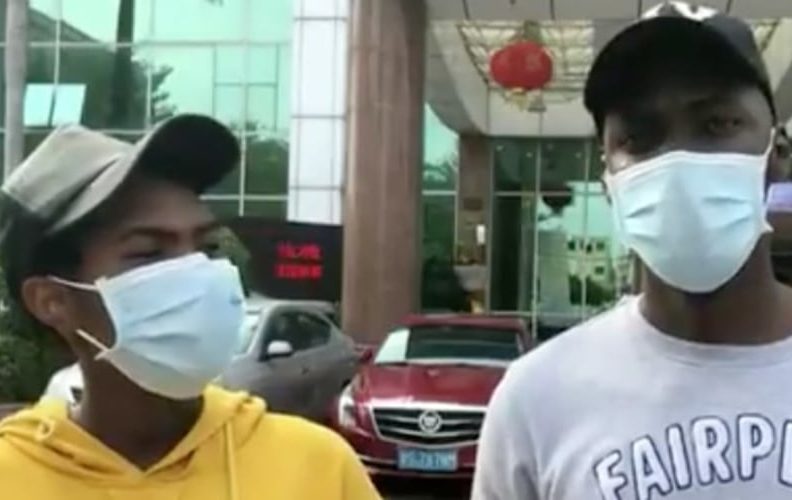 African couple recanting their statement about being discriminated against. Photo courtesy of Twitter

Africans living in China are sharing videos on social media of Chinese businesses discriminating against them due to the coronavirus. Now Chinese government officials are forcing them to recant their experiences.

According to Blavity, Kenyans, Nigerians, Ugandans, and others living in China have been attacked or refused service in Chinese cities due to unfounded claims that Africans are carrying the coronavirus.

A video posted on YouTube, showed a pregnant African woman and her partner being turned away from Nan Hua Obstetrics and Gynecology Hospital in Dongguan in late March.

The couple went to the hospital for an ultrasound and were turned away because they were foreigners. When they posted the video on social media, Chinese officials quickly found them and had them record another video thanking the Chinese government for its help.

However, according to the man in the video, only known as Derrick, things went a bit differently than described in the second video.

In an interview with Atlanta Black Star, Derrick said the Chinese government contacted him after the first video went viral and brought his wife to another hospital.

He shared audio from a recording where you can hear a Chinese government official explain that they wanted the couple to shoot the second video. The shopping trip described in that video ended up being fake as well. After being brought to a mall, Derrick told Atlanta Black Star that government officials left them to pay for everything and provided no assistance.

Several days later, the Chinese government again contacted the couple and asked them to make another video to call the first video a misunderstanding.

“They first asked me to put it off the internet, which I told them not in a position to do ’cause it’s everywhere now. They then took us to another hospital and we got a free pregnancy scan,” Derrick told Atlanta Black Star. “After they ask me to thank the government and deny what happened to us previously and we just call it a misunderstanding. I refused to deny that fact so they edited the original video and turned the blame on me for not understanding what the nurse was telling me,” Derrick added.

Another Ugandan, only identified as Darasa, told Buzzfeed she was denied entry into a 7-Eleven and other businesses because she is black.

“The 7-Eleven employees locked the door as Darasa approached and began spraying disinfectants, she said, only cracking it open wide enough to spray disinfectant around her feet. The McDonald’s nearby also wouldn’t allow her inside, nor would the supermarket,” a BuzzFeed reporter wrote Wednesday.

Darasa posted about the incident on Facebook and was quickly visited by two Chinese police officers who threatened her and told her to delete the video after taking photos of her.

These aren’t the only incidents that have taken place since the coronavirus outbreak.

A McDonald’s in Guangzhou was forced to apologize after putting up a sign banning all people of African descent. The incidents have become so commonplace that Ugandan politician Bobi Wine has offered to airlift mistreated Africans back to Africa.