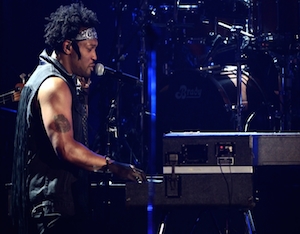 Over the weekend, Brooklyn was treated to a host of events. From Spike Lee’s Michael Jackson tribute Bed-Stuy’s Restoration Plaza to celebrating the 10th anniversary of AFROPUNK, there was no shortage of history making going on in Kings County.

If you’ve never been a part of the alternative festival at Commodore Berry Park, the celebration commemorates live music, vibrant art, good vibes and multicultural excitement. Synonymous with open-minded activism, AFROPUNK continues to set the standard of being diverse, anti-establishment, and the place to see your favorite stars in person. I was on-hand as a regular participant covering the event for Black Enterprise.

Since this wasn’t my first time at the rodeo, I navigated pretty easily between the four stages of non-stop music. From witnessing SZA perform her ambient tunes for the first time to almost getting caught in a mosh pit with Ice T’s Body Count rock band, the event was everything it has been the past few years: erratic, energetic, and flying by the seat of its pants.

Engulfed by the sea of independent distributors looking to sell their afrocentric wares, small business owners like Nubian Heritage were front and center attempting to make good with the swath of people coming from all over to participate in the two-day festival. For me, I was concerned whether or not AFROPUNK headliner, D’Angelo, would actually show up. The past few weeks in preparing to attend the event, I battled the will-he-or-won’t-he speculation that lives on the web, but was reassured by a close friend that there’d be an 80/20 chance of him showing up.

The enigmatic R&B voodoo child wasn’t even listed in the actual show list at the event. Billed as a “special guest,” it was up to the ones with the discerning eye to figure out who would be closing out the 2014 AFROPUNK festival. But ask anyone who was packed by the stage last night (Aug. 24) and they knew it was D’Angelo who would be wrapping up the event. I was there with a few friends, us all anticipating the golden goose of Funk and R&B to grace us with his presence.

Read more about D’Angelo’s performance on the next page …