After 4 Years of Being Missing, Young Boy is Finally Found in Georgia 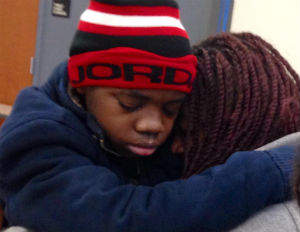 Four years after being reported missing, the 13-year-old young boy was found in Jonesboro, Georgia, behind a fake wall. Authorities have not released the name of the boy yet. However, they had searched the home once prior to his rescue, but it was unsuccessful. They received an anonymous tip to search the home again, and upon completion, they found the boy.

According to reports, the victim was frozen in fear and in extreme shock when the police found him. His mother had reported him missing to child welfare in the past, and called the Clayton County police to initiate the first search after her daughter informed her of his location. The boy contacted his sister via an app on his smartphone to tell her exactly where was being hidden. During the second search, the boy called his mother and verbalized where he was.

Police told WSB-TV how they found the child. Clayton County Police Sgt. Joanne Sutherland stated, “We opened the compartment area where he was and I saw him and asked him to come forward. He was horrified. He was frozen with fear.â€ According to WSB-TV, the boy’s father, 37-year-old Gregory Jean, and stepmother, 42-year-old Samantha Joy Davis, along with three other juvenile suspects were charged with false imprisonment, obstruction, and cruelty to children. The young boy made a visit to his father in 2010, when he refused to return the boy to his mother. Neighbors told WXIA they would see the victim doing yard work and were astonished to learn he was allegedly held against his will. The victim’s mother, who lives out of state, immediately traveled to Georgia reunite with her son upon hearing the good news on Saturday morning. Fortunately, this case has a happy ending and ends with justice. The judge denied the couple bail.