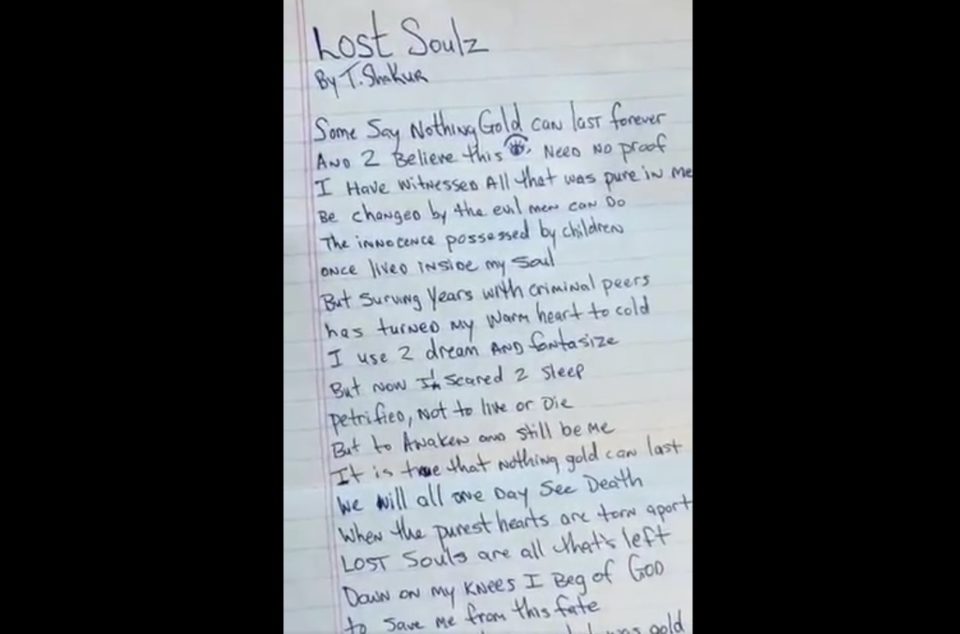 One of the most controversial Hip-Hop figures would have celebrated his 50th birthday Wednesday if he were still alive. To commemorate his birth, an actress who knew him when they were both teenagers shared a rare gift that hasn’t been shown to the public before.

Actress and spouse to one of the highest-paid actors in Hollywood, Jada Pinkett-Smith, who was a childhood friend of slain rapper and actor Tupac Shakur, posted song lyrics he had written and sent to her while he was incarcerated at Rikers Island in 1995. Pinkett-Smith posted the lyrics to what he titled “Lost Soulz” on her Twitter account to celebrate what would have been his 50th birthday.

“Some say nothing gold can last forever / And 2 believe this [I] need no proof / I have witnessed all that was pure in me / And be changed by the evil men can do / The innocence possessed by children / Once lived inside my soul / But surviving years with criminal peers / Has turned my warm heart to cold / I used 2 dream and fantasize / But now I’m scared 2 sleep / Petrified, not to live or die / But to awaken and still be me / It is true that nothing gold can last / We will all one day see death / When the purest hearts are torn apart / LOST SOULS are all that’s left / Down on my knees I beg of God / To save me from this fate / Let me live to see what was gold in me / Before it is all too late.

Tupac Amaru Shakur would’ve been 50 midnight tonight! As we prepare to celebrate his legacy … let’s remember him for that which we loved most … his way with words. Here are a few u may have never heard before✨ Happy “you goin’n to be 50 at midnight” Birthday Pac!😆I got next😜 pic.twitter.com/QAvhCll3zM

P.s I was planning to post tomorrow which is why the video says today is Pac’s bday. But I decided to start earlyyyyy✨