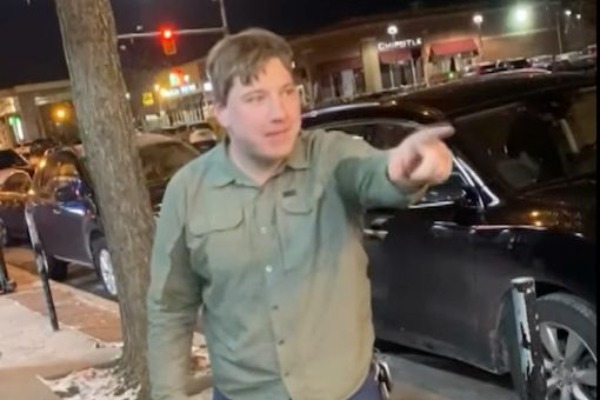 A man with possible ties to the Proud Boys has been identified as the person seen on video hurling racial slurs before punching a Black woman in the face.

In cellphone footage recorded on Sunday night, it appears 26-year-old Andrew Walls of Kent, Ohio, can be seen attacking a young Black woman in Akron’s Highland Square after calling her and others the N-word, the Akron Beacon Journal reported.

Walls has been charged with possessing a firearm while intoxicated and assaulting the 23-year-old Black woman. Capt. Dave Laughlin said Walls called Akron police about 9:30 p.m. Sunday and said he would turn himself in. However, by Monday morning, Walls still was not in police custody.

Video of the incident has spread on social media with many calling for Walls’ arrest.

Please! I need to press charges! I’m heartbroken and sick to my stomach. pic.twitter.com/42nddAm5gh

It was on social media, where users started to connect Walls with a 2019 photo of a strikingly similar-looking man with the same name seen at a table filled with guns at a rally for then-presidential hopeful Beto O’Rourke, who is in favor of gun control.

At the time, Walls identified himself as the vice president of the Akron/Canton Chapter of the Proud Boys.

Now, police say they are investigating Walls’ possible involvement with the white supremacist group. They initially responded to reports of at least five people fighting.

Police arrived around 12:30 a.m. at the 800 block of West Market Street. Walls was still at the scene claiming to be the victim while refusing medical attention. It wasn’t until the young Black woman and her father arrived at the Akron police station that police learned the man who claimed to be the victim was actually the one throwing punches.

“He said he got jumped and they ran away,” Laughlin said.

The father said Walls dragged the Black woman by her hair into the street after punching her in the face. Witnesses also told police that they saw a firearm under Walls’ shirt tucked into his belt.

Because of Walls’ use of racial slurs, police are looking to investigate the case as a possible hate crime.

“The investigation is actively ongoing to determine if additional charges are appropriate,” Laughlin said.