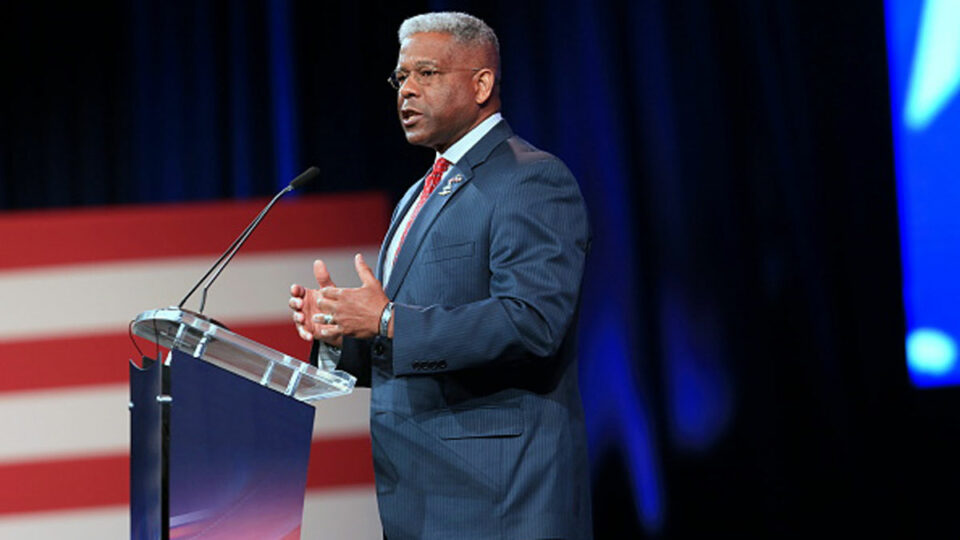 Texas GOP candidate Allen West was released from a hospital after being treated for COVID-19. (Image: Twitter/@NBCDFW)
Texas Republican gubernatorial candidate Allen West revealed he was released from a hospital after battling pneumonia related to COVID-19 over the weekend.
West, who is not vaccinated, was admitted Saturday and tweeted it was due to concerns about his oxygen saturation levels. On Monday, West posted a video to his social media accounts, saying he was released and thanked his supporters for their well wishes.
“I’m doing very well. I’m now back at the house. And I want to send out big shoutouts to the staff here in the COVID unit of the Medical City Green Oaks Texas,” West said in the video.
West, who added he received monoclonal antibody infusion therapy and treatment with a budesonide nebulizer, continued to speak against COVID-19 vaccinations despite his wife being vaccinated and testing positive but did not need a hospital visit.
“One of the things that I’ve learned, there are so many other protocols out there that we should be recommending to people,” he added. “I want to make sure that the Texas Medical Board, Texas Nursing Board, Texas Pharmacy Board, never interfere and get in the way of what’s best for you and your relationship with your doctor and your body.”
According to The Washington Post, West previously stated he had taken both ivermectin and antimalarial drug hydroxychloroquine, medications that have not been approved for fighting COVID-19.
West announced his bid for governor in July after he resigned from his role as the chairman of the Texas Republican GOP. West has also been very critical of current Texas Gov. Greg Abbott who is facing declining approval ratings due to his refusal to initiate mask mandates in public schools and blocking all vaccine mandates by public and private companies. The move has led some schools to defy Abbott’s orders.
Texas is currently second in the U.S. in total COVID-19 cases (4.1 million) and deaths (68,154).
Allen has made several headlines this summer. In June, West called the Black Lives Matter movement the ‘Overseer of the left-wing plantation.’ In August, the gubernatorial candidate blasted the Dallas Police Department for arresting his wife on suspicion of DWI.