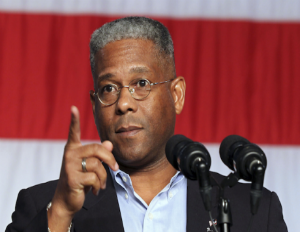 Flamboyant Republican and U.S. Representative from Florida, Allen West, who wasÂ 2,456 votes behind Democratic challenger Patrick MurphyÂ in Tuesday’s unofficial tally, has filed a lawsuit demanding a recount and citing “disturbing irregularities” at the polls.

His campaign was in court today in West Palm Beach asking that the ballots and voting machines be impounded.