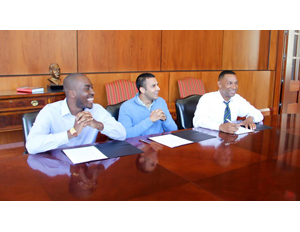 Alumnify recently partnered with the Thurgood Marshall College Fund organization to create a vast resource for alumni: A mobile platform that allows alumni from 48 HBCUs to find, stay connected, and network with one another.

The app is the brainchild of the startup Alumnify which also credits Thurgood Marshall Fund CEO and president, Johnny Taylor for providing guidance and direction in the effort. It’s a platform built exclusively for TMCF and powered by Alumnify.

Alumnify is an app that connects high school and college alumni. For TMCF, the company created a separate platform which includes all of the schools involved with TMCF. Users can engage with other alumni in a variety of ways: plan meet-ups, message, share career and other information, and more.

Since its inception in the summer of 2014, Alumnify has been well-received in the startup world. The company was developed from a 12-week coding boot camp in Silicon Valley called Coding Dojo, according to Eghosa Aihie, who heads up operations. In addition to Aihie, the company was also founded by AJ Agrawal, who is the CEO.

The company got off the ground after winning a pitch competition at the founders’ alma mater, the University of San Diego. That win landed them their first initial investment. They later received investments from 500 Startups, Chattanooga Renaissance Fund, and Zillionize. Alumnify’s total funding to date is $1.3 million.

While it’s too early for the company to share revenue information, Aihie says the marketplace is opportune for a startup like Alumnify.

“Alumnify has placed itself within the crosshairs of social media and higher education marketplaces. From 2013 to 2019, the total higher education market will grow from $43.06 billion to $65.83 billion at a CAGR of 7.5% during the forecast period. Additionally, the total number of worldwide social media users is expected to rise from 1.6 billion users in 2012 to 2.3 billion users in 2016,â€ he says.

According to Aihie, what separates Alumnify from competitors such as Evertrue, Evisors, and Essenza software, is that “Our product has the best UI/UX of any competitor in the market. Our software is also built for mobile and more focused on engaging the user than anyone else.â€

Alumnify currently has a team of eight and is used at 135 universities worldwide. The TMCF platform is scheduled to launch in January.