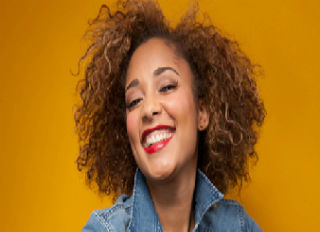 Amanda Seales (formerly known as Amanda Diva) is a woman of many talents and the perfect person to kick off the newest column on our Lifestyle channel titled “Life Is Good.”

Listing everything she’s done would take up all the space for this column, but let’s just say she’s done a lot.

She’s taken up hosting duties on MTV and MTV2, you may have seen her face on numerousÂ episodesÂ of VH1’s Best Week Ever, she paints, she sings and even DJs. Basically, she lives that free spirited, creative New York life that people make movies and books about.

I got the chance to chop it up with Amanda (who happens to be a neighbor) about living the dream in the real world. She’s a hoot. Check it out.

BlackEnterprise.com: If I were to ask you what do you do for a living, what would be your response?

Amanda Seales: I struggle with that every time. I was just talking to my mom about that earlier today. I wish I had an easy response to that question. For some people, I can say artist and they get it, but to really answer the question I end up having to list all these things – and it sounds like I’m trying to show off –Â  and I’m definitely not about that. Sometimes I sum it up and say I’m a renaissance woman who works within several facets of the arts, but even that sounds hella vague.

Because you do so many things, do you ever feel like you’re doing too much or do you feel all of these things are necessary parts of your creative release?

A lot of artists feel this sense of unsettledness. I crave a settled homelife. I’m not about the single life and getting it in. Can I just have someone I can rock out with? I have so much going on, I need stability at home. There are those moments where you’re like “Is this what I should be doing?â€ and then you re-evaluate. I stopped doing music because I got a solid feeling that I needed to be inhabiting a different space and I was just kind of over Hip-Hop.

Over hip hop? You still DJ though, right?

I do and I love to spin and I love to spin Hip-Hop. But I need to be specific in how I promote myself as a DJ. Up until now I do whatever is called for, but really, I just want to play music from before 2004. That’s the beginning of my classics. After 2004, I’m in the real world. When I play those records I feel so good. People who are in my age group or older feel me. I’ve come to that conclusion.

Something I really admire about you is that you have managed to make a living based purely on your creative efforts. You basically make money out of thin air, well not thin air, but…

No, no. That’s exactly right. I definitely make money out of thin air. Sometimes I have to create the air too.

As an adult have you ever had a regular job?

Have you ever been afraid that you couldn’t keep yourself afloat without a regular job?

Absolutely! Up until last March really. The second week of February, I texted my boy and told him I had to get a job. He told me to give it four weeks and in those four weeks “Hip Hop POV” got picked up on MTV and I did my one-woman show “Death of the Diva.” Those two things happening at the same time meant everything. I’ve had the best year I’ve had since 2004 when I was on MTV2.

It was my best year financially and creatively. I can be more creative when I’m not stressing about finances. I’m trying to transform grassroots into money trees.

What’s a typical day like in the life of Amanda Seales?

There isn’t one. I spent the last two days watching PBS.org. I’ll be in Brazil singing and DJing in a couple weeks and today I’m looking for paint so I can paint some glasses. I decided I want to paint a dishware set. That’s my day today.

It’s hard to put a dollar amount on a piece of art. How do you determine the prices for your work?

I factor in time, supplies and labor, but the biggest factor right now is my audience. I’m not selling to millionaires. I’m selling to people that work. They pay their bills and they have a little left over. We all live outside of our means, myself included. I’m selling to those folks.

It’s great to be independent and not have a “jobâ€ per se, but with freedom comes responsibility. How do you make sure you’re good every month financially?

I wish I had an awesome framework to share with you, but I don’t. I am not a religious person, but if you keep working, it will come. That sounds so lame, but it’s true. You do have to create things out of thin air. For example this year with Death of the Diva, it was the laws of attraction at work. I created a magnet for myself and everything came together. As an artist, you have to figure out what people like about you. When I do things that are smarty or arty, people like it, so that’s what I’m doing. It’s who I am anyway. I don’t wear a mask. I want to be part of the cannon.