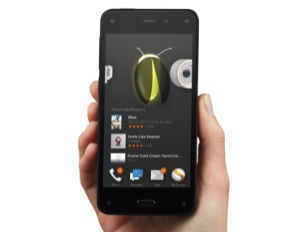 Amazon's Fire Phone can track your head and buy almost anything, but only works well when you stay inside Amazon's walled garden.

The Fire Phone’s 4.7-inch display is only 720p, making a phone like the HTC One its superior. Powering the Fire Phone is a 2.2GHz Snapdragon processor with 2GB of RAM and an Adreno 330 graphics processor, the same one in Samsung’s Galaxy S5. It’s got a 13-megapixel camera with image stabilization, and is able to upload an unlimited number of photos to its cloud service.

A TASTE OF PRIME

Amazon is betting big on its glut of Prime-powered services; it’s even offering a year of Prime for free with the purchase of a Fire Phone (for a limited time), a $99 value.

But what does Prime get you? Thousands of ad-free movies and shows, around a million ad-free songs, and free two-day shipping, all services you’d have to pay a monthly fee for elsewhere. Amazon is taking on Netflix, Hulu, Spotify, and Beats all at once. It isn’t offering a superior service, though, but it’s offering just enough media to keep consumers inside Amazon’s world, watching Amazon’s content.

Everyone was waiting for Amazon’s not-so-secret surprise: its front-facing cameras. The Fire Phone has one of every corner for mapping your face and creating a pseudo-3D environment on the display. You can look around maps, and tilt it to scroll through webpages, among other things.

At a friend’s house and see a book you like? Normally you’d use Google to look it up, or even ask your friend to lend it to you. But Amazon’s Firefly can do one better: with a photo, it can recognize the book and let you buy it from Amazon. It works with pretty much everything, from jars of Nutella to classical paintings.

Amazon didn’t unveil any sort of sponsored data plan, but it did snag an exclusive partnership with AT&T, making it the official carrier for the Fire Phone, at least for now. A 32GB Fire Phone will go for $199 on a two-year contract, or $649 without one. Judging by the specs, the phone will play nice on both AT&T as well as T-Mobile networks.