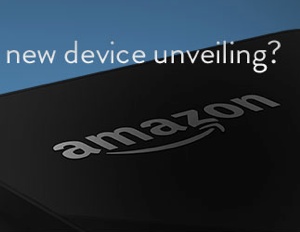 Amazon has the e-reader market basically in a headlock, and is trying to do the same with tablets. Is the smartphone next?

Thanks to a teaser image from Amazon of what looks like the corner of a device, the company has all but confirmed the existence of the long-rumored Amazon smartphone, and will make an official announcement on June 18 in Seattle.

Smartphones with 3D screens aren’t new, and with the market pretty chock full of devices from Google, Apple, Microsoft, and BlackBerry, how is Amazon planning to differentiate itself?

The answer could lie, as it usually does with Amazon, in its content. Or, more specifically, its method of content distribution. The company is reportedly partnering with AT&T to use the company’s Sponsored Data program to bring content like music and movies from Amazon to the device for free through Prime Data.

Amazon’s product expansion, starting with the Kindle, has helped the company grow from a media provider to a platform for consumption through its own devices. Amazon most recently introduced the Kindle Fire TV, Amazon’s answer to the AppleTV and Roku device.

The level of control offers Amazon the unique opportunity to provide a device for almost every form of media, from books to music to apps, much like Apple. In fact, it’s the closest competitor to Apple in terms of providing an entirely self-sustaining ecosystem for devices.