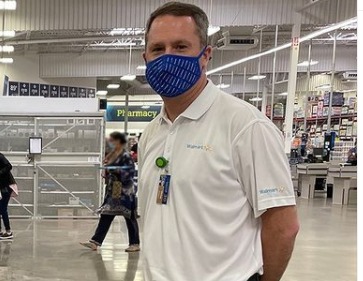 Doug McMillon is the president and CEO of Walmart Inc. Credit- @dougmcmillion- Instagram

Walmart Inc. is taking steps to fulfill a commitment to make its leadership more inclusive. Bloomberg reported that the company recently increased Black corporate officers. Representation returned near to where it previously stood in 2015, according to Bloomberg.

“The nation’s biggest private employer said employees who identify as Black now account for 8.4% of corporate officers in the U.S., which includes vice presidents and above,” Bloomberg said. “That compares with 6.9% in a report released in the middle of last year, representing a sharp rise for such a massive workforce in a short period of time.”

Bloomberg added that the figure had previously been as high as 8.7% in 2015. However, it dissipated. Recent progress has been intentional. Walmart’s website identified Doug McMillon as the president and CEO of Walmart Inc.

“Doug is the chairman of Business Roundtable, an association of chief executive officers of America’s leading companies,” the website also stated.

McMillon is described as “a longtime champion of Walmart’s customers, its associates and the company’s culture.” He has been openly working toward achieving substantive goals by addressing racial inequities.

For example, in 2020 CNBC reported that McMillon partially said the country’s top CEOs would look for ways to advance racial equality and justice solution.

In an interview on CNBC’s Squawk Box, McMillon stated that the death of George Floyd—who was an unarmed Black man pinned down by a Minneapolis police officer who kneeled on his neck— prompted urgency beyond only a monetary donation.

“What we see is a moment here, a moment where we can make a bigger difference,” McMillon stated.

In an email to employees, CNBC said that McMillion added that Walmart would increase recruitment of and support for people of color, including African Americans. Walmart also stated that the company saw solid year-over-year growth in representation at the officer level with a +1.03% increase for women and +0.61% growth for people of color in 2020.