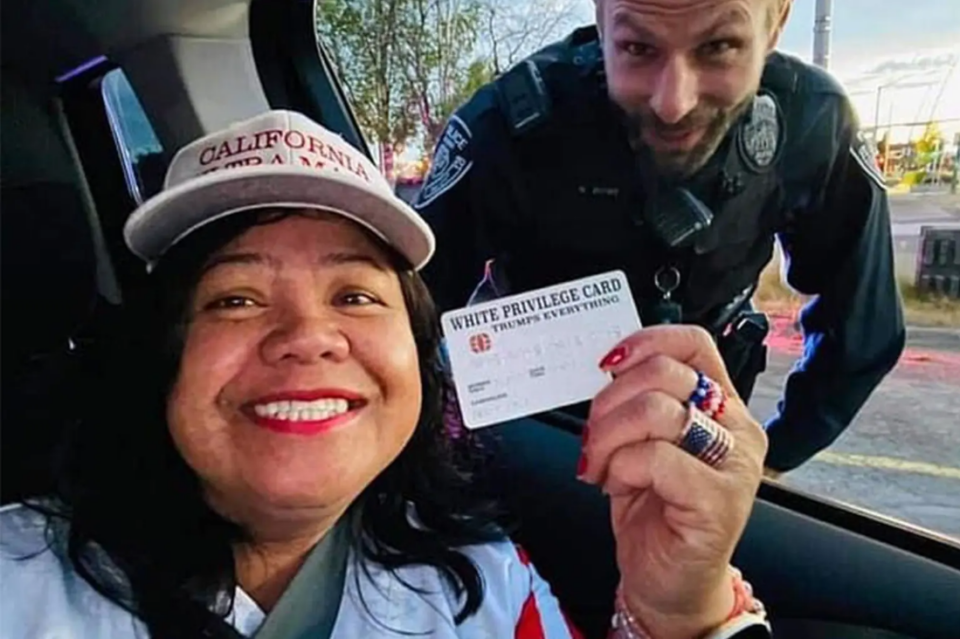 A couple of police officers in Alaska are under fire for allowing a Donald Trump supporter who was driving without her driver’s license off the hook after she showed them a “white privilege” card.

According to the Anchorage Daily News, two police officers from the Anchorage Police Department violated departmental policy last month in an incident that took place on July 7. The two police officers, Nicholas Bowe and Charles Worland, allowed a woman to drive off without a citation after she presented what she called a “white privilege card.” The woman, Mimi Israelah, who identifies as Filipina or Pinay, was stopped by Bowe and Worland after they noticed her car swerving while she was driving at 3:37 a.m. As they pulled her over, she claimed she was heading to purchase some pizza. She had been in town to attend an upcoming Trump rally. Israelah told the officers that she didn’t have her driver’s license but instead showed them a card she had purchased from a novelty website which she labeled a “white privilege” card. They laughed and allowed her to proceed without a warning or a citation.

The issue arose when Israelah posted the encounter on her Facebook page. (The post has since been taken down). Her social media post was widely circulated, pointing out that she wasn’t ticketed due to her presenting the so-called “white privilege” card. People were offended by the post, and the police officers responded.

In the post, she took a selfie with Officer Bowe holding up her “white privilege card,” which she stated worked instead of a valid driver’s license.

“He asked for my driver’s license. I looked in my wallet, but I couldn’t find it,” she wrote in the original post. “When I saw my White Privilege card, I gave it to him if it’s ok. He laughed and called his partner.”

The 45 groupie who attends all his nationalist rallies had an …interesting interaction with APD Saturday. First pic is from today’s ADN, she’s front & center in the crowd, the other a screen shot from her page. APD’s been struggling for years not to appear racist. #Fail pic.twitter.com/1TmL8ZVmSE

The police officers were put on administrative leave during the 11-day investigation. Deputy Chief Sean Case said, “We recognize that the post, what was contained in that post, caused a bit of a public uproar, and there were a lot of people that saw that and did not like that post and had negative reactions to that — thought it was an inappropriate post — and we recognize that.”

Wondering why APD posted a strange mea culpa today? It’s because this person reported not being cited for driving without a driver’s license after she told police she was in Alaska from out of state for the Trump Rally and presented a novelty “White Privilege” card instead. https://t.co/WfCPImzG6h pic.twitter.com/0srIkn6prw

It’s unclear if the police officers were charged or suffered any penalties.