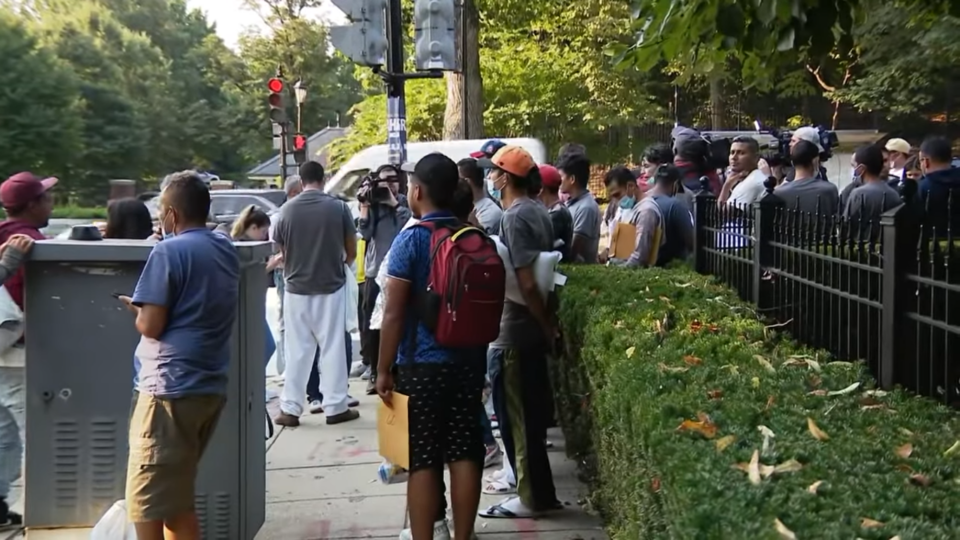 (Image: YouTube / NBC News / Screenshot) Migrants wait on a corner in Washington D.C. after being transported from Texas.

On Thursday, a bus of about 50 migrants from Texas arrived outside Vice President Kamala Harris’ D.C. residence near the Naval Observatory in Washington D.C.

According to NBC News, it is the second bus of migrants to pull up to Harris’ residence. The migrants, which included men, women, and children, told NBC they were from Venezuela and carried white plastic bags of their possessions.

Many of the migrants added that they were planning to travel elsewhere after arriving in D.C. One man named Victor told NBC that he was given food on the bus and was treated “very well.” Volunteers and representatives of several nonprofits, including SAMU First Response, were on hand to greet the migrants.

While the move was intended to expose issues at the Southern border by Abbott and Florida Gov. Ron DeSantis, it is actually helping migrants get to family members and to states that can provide better humanitarian services like healthcare and shelter.

“Abbott is one of the only state actors that is giving immigrants a free benefit, a free ride,” Abel Nuñez, executive director of the Central American Resource Center, told the Texas Tribune.

“You’re actually creating a free program that if a Democrat would have said it, he would have gone against it.”

Nuñez added immigration nonprofits typically try to provide transportation to an immigrant’s preferred destination but lack the funds to serve everyone.

Democratic mayors, including New York Mayor Eric Adams and Chicago Mayor Lori Lightfoot, have blasted Abbott and DeSantis for transporting the migrants without notifying the cities and states first so they can coordinate a response.

Adams is reportedly building a 1,000-bed heated facility to help house the immigrants temporarily and is in talks with Norwegian Cruise Lines to rent a cruise ship to house more migrants before they enter the city’s shelter system.

Illinois Gov. J.B. Pritzker issued an emergency declaration last month to help the city of Chicago serve the more than 500 people who arrived in the Windy City from Texas.