Another One Gone: Twitter Mourns The Lost Of Antonio Martin 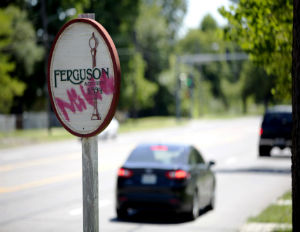 Angry clashes have sparked again, this time in Berkeley, Missouri, which is just miles from Ferguson, as another black teenager ends up lifeless on the pavement.

Late Tuesday evening, St. Louis County Police confirmed in a statement that an as-yet-to-be named officer had “fired several shots,” claiming that he was “fearing for his life”. Reports are conflicting, but the police is saying that 18-year-old Antonio Martin allegedly pull out a handgun and pointed it at the officer, which resulted in his being assaulted with bullets. While police add that the weapon drawn has been recovered at the scene of the shooting, surveillance is spotty with Martin’s drawing of the gun obscured.

St. Louis County Police Chief Jon Belmar quickly held a news conference in the wee hours of the night to detail that events for the populace. The officer involved is a six-year veteran of the force and has been placed on administrative leave while an investigation by local authorities is carried out. According to Belmar, the officer shot at Martin at least with three rounds of bullets, but the victim did not fire any. “These are nothing but tragedies,” Belmar said as he offered his condolences to the Martin family.

“The officer will have to carry the weight of this for the rest of his life,” he said, adding, “there are no winners here.”

Berkeley is only two miles away from Ferguson, Missouri, now considered ground zero for the latest string of cop versus unarmed black persons in America. Protests have spread nationwide and globally, as Michael Brown served as the fatalist casualty that sparked the fervor. Early Wednesday, an angry crowd of about 200 gathered near the scene of the shooting and instantly there were angry clashes with police. “I can see about 50 cop cars, they’re fighting and scuffling, the highway is blocked with cars, people are being arrested,” said photographer Bradley Rayford.

Such harrowing news is ultimately depressing, especially since it seems that more black families are picking out caskets instead of Christmas gifts. With this still developing story on the nation’s consciousness this Christmas Eve, we here at Black Enterprise offer our sincerest condolences to the Martin family. Twitter was in the same vein and took out their collective frustration in less than 140 characters by questioning the scene of the shooting and mourning the passing of another black life lost.

Watch the surveillance video for yourself and read the commentary on the following pages: