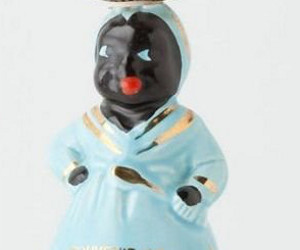 After several sites and users pointed out the bizarre vintage-style racist candle stick, the popular clothing line Anthropologie is no longer selling the item, leaving many to wonder why they offered it in the first place.

Anthropologie is a chain of retail stores that sells women’s apparel, accessories, home furnishing and other gifts. With 147 retail stores across the nation, the line is known for its women’s clothing and unique gift items. Many of its products resemble objects one would find at a flea market or a road show.

The item in question is a $400 candlestick that stands 2 feet tall and has various kitsch items stacked on top of each other, including a bust of President John F. Kennedy. Most noticeably is the image of a “Mammyâ€ style doll in the middle of the candlestick. The item also has an “Asianâ€ style figurine at the base of the stick.

At the time of publication, this item named “Trinkey & Treasureâ€ Candlestick was still listed on the site, but the words, “We’re sorry. This product is no longer available,â€ had been added to the description.