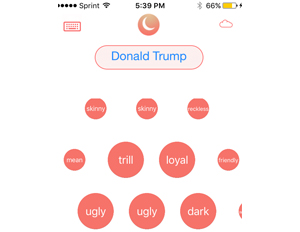 It’s a mobile app that lets users describe themselves, their friends, and anything else in three words.

“What we are trying to do is make reviews more social and more mobile. The last time I was on Yelp there were 126 reviews and I was not about to go through over 100 reviews to [learn about] a restaurant,â€ said Rucker in an interview with Black Enterprise.

“[With Charmer] we are creating an atmosphere where you can describe things in three words so [users] can get a sense of location or products.â€ These three words are called Charms in the app.

With the app’s back-end technology, the Charmer team can also look specifically for users’ descriptions about the presidential debate and the election in general.

“Debates are coming up and we’re all excited to see how people describe themselves, their friends, and most importantly, the presidential candidates in three words on our app Charmer,â€ Rucker said in a released statement.

HeÂ says the team is already seeingÂ how its users describe Clinton and Trump in three words.

The average age range of Charmer users is 17—28. The company will create anÂ infographic of collected data including the aggregate top words used to describe each candidate and the top words per location.

RuckerÂ says Charmer’s user base is growing “exponentiallyâ€ since its launch. The company recently moved to San Francisco to be at the heart of the technology scene.

Is Private Tutoring the Key to Student Success?

This Financial Aid Resource for Students Opens This Weekend

FacebookTwitterYoutube
← Is Private Tutoring the Key to Student Success? ← This Financial Aid Resource for Students Opens This Weekend
×
'