The App That Keeps the Jokes Comin' 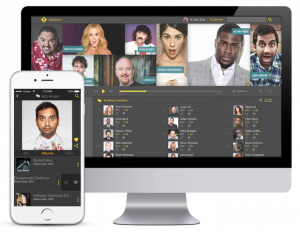 What if you could laugh on-demand as easily as you could watch videos on-demand? Well, now you can!

Laugh.ly is an app that allows you to listen to the world’s largest library of stand up comedy for free. You can listen to some of your favorite stand up comedians, including Kevin Hart, Eddie Murphy, Chris Rock and a host of others. In fact, there are over 660 comedians on the platform and the list keeps growing.

“We partnered with folks like Comedy Central, Comedy Dynamics, and 11 other music labels to source our material,” says Dave Scott, Laugh.ly’s founder and CEO. “In addition, we go directly to the comedians themselves to establish our relationships.â€

Scott’s business model is simple; it’s a 50%/50% split between the content creators and the platform, which is calculated per play. “We’re not the only one’s who want to get rich,â€ says Scott. “We want to make sure that the comedians are taken care of as well. Every time that track plays out around the world, we pay out our comedians.â€ They definitely have the upper hand on Spotify, in that regard.

Scott felt it was important to create this platform, not only because of his love for comedic content, but because he also used to be a stand up comedian. During a very short stint while living in New York, Scott decided to try his hand at the craft. He found that he wasn’t half bad (or so he says), and he was actually given the chance to open up for veteran comics like Nick Cannon, Nick Dipaolo, and Janeane Garofalo. These experiences allowed him to see the industry from a different perspective, and he quickly realized that there wasn’t a place to find good comedic content all in one spot.

Laugh.ly recently closed a $2.5. million seed round, with New York Angels as their lead investor, so there will be plenty of growth and expansion on the way. But for now, if you want to get your laugh on, you can download the app here on iTunes and Google Play.

Sequoia Blodgett is the Technology Editor for Black Enterprise, Silicon Valley. She is also the founder of 7AM, a lifestyle, media platform, focused on personal development, guided by informed and pop culture.