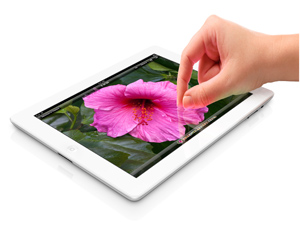 Today is the day tech enthusiasts, gadget hoarders and loyal Apple consumers have been anxiously awaiting.Â  After the tech giant sent out email invitations to a select few regarding its March 7 announcement, the web went crazy with chatter and, mostly, rumors about what consumers should expect from the next iPad.

Apple CEO Tim Cook set the record straight during today’s announcement, which took place at the Yerba Buena Center for the Arts in San Francisco at 10 am PST/1 pm EST. While several features on the latest iPad iteration remain the same such as its 9.7 inch screen, 9mm thickness and nearly two pound frame, there are several reasons to get excited about the tablet device.

For one, the third-generation iPad has a super-sharp screen that has double the resolution than current iPads; it boasts a high-definition Retina display with 2048×1536 pixel resolution. Â To get a grasp on how crisp that is, think about the average HD TV. Well, that’s 3.1 million pixels, nearly 1 million more than the average HD TV, according to the company. If you thought the iPhone 4 had a great camera, prepare yourself for the iPad 3’s iSight 5 megapixel camera, found on the back, offering a five element lens, backside illumination and facial detection for still images, among other features. Also, you can record video with the camera’s HD 1080 pixel video capture. Another iPhone 4S-esq feature available on the latest model is voice dictation. It’s not exactly like Siri since it’s not the entire voice recognition feature, but it will turn voice into text.

The iPad 3’s A5X chip processor is twice as fast as the old Tegra 3 chip and has four times the graphics performance, according to Apple.

Users on AT&T and Verizon networks will have 4G LTE connectivity, which will give them a higher wireless speed. The 3G connectivity of the new iPad has greatly improved, so much so that the iPad can act as a hotspot, providing Internet access to other devices.

The company also announced updates to Apple TV, which will be available March 16 for $99. In addition to the user interface looking like iOS with thumbnail buttons for movies, podcasts, shows and other programs appearing on the screen, Apple TV will support a 1080p specification.