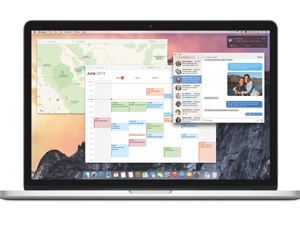 Apple’s Worldwide Developer’s Conference kicked off today with a slew of software announcements, including an updated mobile operating system–iOS 8–and Mac OS X Yosemite, the upcoming software update for its Mac desktop and laptop computers.

The latest version of the OS is named after Yosemite national park, a trend started in OS X Mavericks when the company decided to name their desktop software releases after various places in California.

“Yosemite is the future of OS X with its incredible new design and amazing new apps, all engineered to work beautifully with iOS,â€ said Craig Federighi, SVP of Software Engineering. “We engineer our platforms, services and devices together, so we are able to create a seamless experience for our users across all our products that is unparalleled in the industry.”

While there were a number of improvements made on the previous operating system, Mavericks, the highlights were more than enough to warrant their own conference.

Apple’s software has generally had a polished look about it (we’re not counting the leather iCal fiasco), and Yosemite takes that even further. It looks more iOS than OS X, and features a more transparent window design, a simpler theme, and less textures and gradients.

Apple’s stepping its cloud storage game up with a revamped iCloud. Dubbed iCloud Drive, the new service offers Dropbox-like syncing of files and app data, and lets other apps pull data from other apps. Have a photo in Sketchbook? Use another photo editing app to grab it from Sketchbook’s iCloud Drive and manipulate away. iCloud Drive offers up to 5GB of free storage, with more space costing you $0.99 per month for 20GB, and $3.99 per month for 200GB.

Switch from Mac OS to iOS seamlessly with Handoff:

If you’re working on an app with a desktop and mobile app, you can use Handoff to switch instantly from one to the other without losing any work. On your iOS device you’ll see a tiny logo of the app your desktop is working on. The same goes for switching from your mobile device to your desktop. Federighi demoed the feature by typing an email on his phone and then switching to his Mac to finish composing it.

Take calls on your Mac:

If you’re still using your iPhone as, well, a phone, you can now offload that service to your Mac. If your iPhone is in your pocket or your bag across the room, any calls made to it can be rerouted to your Mac, and you can answer the call from your desktop or laptop.