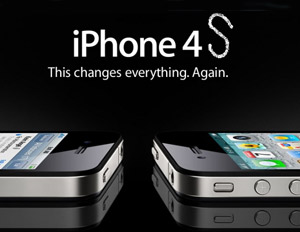 Today was the day smartphone users were eagerly awaiting, as Apple execs gathered a select group of media in California for the announcement of a new version of the iPhone. While most were expecting the unveiling of the highly-anticipated iPhone 5, news of the next generation mobile device did not come to fruition. But the press conference was not all smoke and mirrors as Apple did make some major announcements. Namely, software upgrades over hardware that will keep the company competitive in the ever-growing tech sector.

The upgraded iPhone 4S will be available Friday, October 14 and will feature the same A5 dual-core processor as the iPad and graphics that are 7x faster. Camera functions get an upgrade with an 8 megapixel sensor that’s 60% more from the current iPhone 4 and it now features 1080p video quality. There’ll also be 4g data speeds and better battery life.

Physically, the phone will look pretty much the same but the 4S has a few new features, namely Siri, which introduces an intuitive voice recognition technology. Billed as an “intelligent assistant,â€ the feature allows users to talk to their phones, which will respond with answers ranging from the weather, NASDAQ quotes, and the location of your nearest Starbucks or restaurant. You can even set verbal commands for alarms and appointment reminders. Your wish literally is the iPhone 4S’s command.

Available in both white and black, the 4S will be available for preorder this Friday (Oct. 7) and available in the US, Canada, UK, Australia, France, Germany, Japan on October 14, and retail for $199. (The current iPhone 4 will drop down in price to $99). There will be a Sprint version in the US, alongside AT&T and Verizon ones. Seventy additional countries will have the 4S by year’s end.