Apple's Rumored Healthbook Will Track Nearly Everything Down to Your Blood 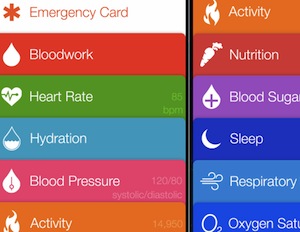 Apple's rumored Healthbook app tracks everything from your respiratory rate to your blood sugar, and is expected to be released with the next-generation iPhone.

Apple’s fitness ambitions may arrive sooner than you think. According to 9to5Mac, the company is working on Healthbook, a fitness and health tracking app that could integrate with third-party fitness trackers or even Apple’s rumored wearable.

The app has multiple cards, much like Passbook, that deal with health metrics like blood sugar, heart rate, nutrition, and sleep.

While things like what you ate for breakfast will have to be entered manually, steps taken and sleep patterns could be captured by any number of existing fitness devices like the Basis B1 band or Jawbone’s UP.

There’s no single device that’ll track all of the metrics seen in Apple’s Healthbook app, but that may change soon enough.

The company is rumored to be working on a wearable device, the “iWatch,” that will function as both a smartwatch and a fitness device.

The iWatch isn’t alone in the battle for your wrist, however. Google’s announcement of Android Wear and Motorola’s Moto 360 are both preemptive strikes against Apple and its rumored wearable device.

While there is no definitive date for the device, you can bet Apple will come out of the gate swinging.