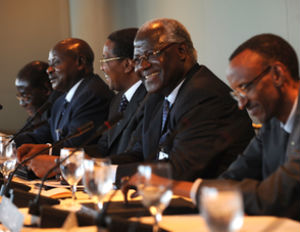 I have been doing work on the continent of Africa for many, many years and to my dismay, Africa’s approach to international engagement is juvenile at best and incompetent at worst. Africa’s weaning from their various colonial powers began in earnest in the early 60’s, so their claim of being a fledgling democracy is no longer valid. For the uninitiated, there are currently 54 countries that makeup Sub-Saharan Africa.

African leaders constantly complain to me about the way the U.S. media portrays them and how our “officialâ€ government policy towards the continent is not acceptable to them.Â  So, I will therefore pose a few questions to my African brothers and voice a few complaints of my own.

I am in total agreement with African leaders when they complain about how the U.S. media portrays the continent.Â  The media usually focuses on war, famine, disease, corruption, etc.Â  You can find these same ailments in any large U.S. city, i.e. Washington, D.C.Â  You have gang wars (to control the drug trade), people who don’t have food to eat, AIDS running out of control and politicians being sent to jail. But what have these same African leaders done to address their concerns about U.S. media coverage? Absolutely nothing! They whine and complain like a crying baby waiting for mommy to pick them up in her arms to console them.

Africans also complain about the lack of importance Americans seem to place on Africa.Â  Well, Mr/Ms. African president, please tell me why Americans should care about the continent or your particular country? How is your success vital to America’s success? Of all of America’s competing priorities, what is the rationale for us giving Africa our attention and support?

The reason most Americans lack awareness of Africa is that African leaders have not given us a reason to pay attention to Africa. I can’t remember the last time an African leader actually engaged directly with the American people in a public forum (outside of New York or DC) or visited a Historically Black College and University (HBCU). They will most surely visit a white university before they would a black one.

Most Americans don’t believe you can do successful business on the continent because African leaders have never shared success stories with the American people. African leaders typically come to the U.S. and meet with the usual white organizations: U.S. Chamber of Commerce, Corporate Council on Africa, etc.

The white lobbyists and law firms they hire to plan their trips never think of people like Dave Steward in St. Louis, MO (my hometown). Steward is one of the most successful businessmen in the U.S. and is black. His firm, World Wide Technology is one of the largest technology firms in the U.S. with revenues in excess of $ 5 billion U.S.

Junior Bridgeman is another top businessman. He is the second largest Wendy’s franchise in the world and owns several other brands of restaurants with revenues in excess of $600 million.

Two of the most successful physicians in the state of Florida, Dr. David Abellard (Haitian) and Dr. A.K. Desai (Indian) could be invaluable in designing or expanding the healthcare system of any country on the continent. Two of the most prolific minds when it comes to understanding America’s policy towards Africa are Gregory Simpkins (Professional Staff Member, U.S. House of Representatives Subcommittee on Africa, Global Health and Human Rights) and Malik Chaka (Director of Threshold Programs, Millennium Challenge Corporation)–both Black.

David Saunders and Helen Broadus, owners of Venue International Professionals, Inc. (VIP), are two of the most knowledgeable people when it comes to planning excursions to the continent. Rarely does Africa’s Ministers of Tourism seek out their knowledge when trying to promote tourism to their particular country. They are also Black.

These individuals are just a few of the people in the U.S. that can bring solutions to issues facing various African countries. I am not suggesting that these African leaders give up their usual trek to their white organizations; but I am suggesting that you broaden your programs to include other American citizens and organizations that can add value to the collective goals of making Africa more relevant to the U.S. and its citizens.