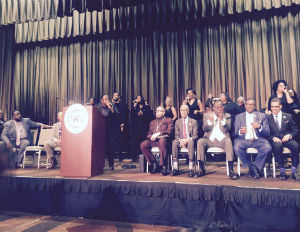 Last week, Al Sharpton’s National Action Network kicked off its annual conference with a panel titled “2016: A Transitional Election Year with Much at Stake.” While panelists such as Angela Rye, April Ryan, andÂ  Lawrence O’Donnell, received overwhelmingly positive feedback from the audience, Ben Carson adviser, Armstrong Williams did not enjoy the same results.

[Related: Why Trump’s Own Kids Won’t Be Voting For Him]

In his opening remarks, Williams forcefully proclaimed that “not everything in America is about race.” Unsurprisingly, this statement met with resounding boos from the audience.

Undeterred, Williams cavalierly informed the audience that he did not mind the boos, and was in fact used to them. Not to be outdone, the audience booed louder, until the moderator was forced to intervene.

Once the audience had calmed, Williams began to emphasize the importance of forcing both parties to truly invest in black communities in order to earn the black vote.

“Make these people earn your vote. If it’s Donald Trump, so be it. If it’s Bernie Sanders, so be it. Do not allow the Clintons and the establishment to waltz in here and wave their hand and everything is OK,” Williams said.

While these particular remarks were more warmly received by the audience, it was Angela Rye who garnered the most approval.

Telling the audience that she was feeling “super, unapologetically black right now,” the IMPACT Strategies CEO spoke of the Democratic Party’s accountability to black voters.

“If over 90% of us are voting in the Democratic Party, the Democrats need to be accountable to us,” Rye said.

She also touched on the controversy surrounding Hillary Clinton’s involvement in the 1994 crime bill. Referring to Clinton’s questionable language when advocating for her husband’s bill, Rye stated “I don’t want to be called, or anyone in my family, to be called ‘superpredators.'”