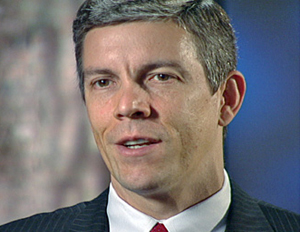 What if we lived in a country in which we spent billions of dollars not just on wars and prisons, but on the future of our young people?

In it, according to prepared remarks distributed to the press, he will lay out not only the problem of mass incarceration in the U.S., but also assert fresh approaches to a problem that wastes American potential; not to mention billions of dollars, and silently wrests trillions every year from the U.S. economy.

[Related: New College Scorecard Takes the Guesswork Out of Picking a School]

The facts are distressing. According to Secretary Duncan:

We have a serious problem.

But Duncan proposes a sensible solution: Why not invest in education instead of prisons? Why not raise the salaries of teachers who work in schools of greatest need?

Duncan states that a single year with an effective teacher yields benefits in students’ lives that not only increase their lifetime earnings, but also the likelihood that they’ll go to college; it also reduces the chance of their having a child in their teenage years.

He imagines a shift in funding priorities and has the figures to back him: States and localities could save up to $15 billion a year if half–just half–of their prisoners convicted of nonviolent crimes could be put on a more productive path and taken out of prison. The savings could be reinvested in paying teachers in high-need schools, or used to support teacher leadership.

The bottom line, Duncan says, is that we need to do more to ensure that the most capable teachers go to the toughest schools. He also says we need to “challenge everything,â€ shifting our mindset to that of helping young people realize their full potential, instead of being OK with warehousing and blunting all their human possibility.

He also makes the economic case for this shift:

But Duncan also concedes that much of the prison and education connection falls disproportionately along racial lines. “We also know that suspension, expulsion, and expectations for learning track too closely with race and class,â€ he says, and affirms celebrated journalist Ta-Nehisi Coates’ observation that the country’s high rates of incarceration, high numbers of high school dropouts, and high rates of child poverty are not unrelated problems.

He also speaks of the need to become aware of our biases–biases that black people also hold, I might add–and to learn not to act on them.

So many children, even the most disadvantaged among us, could have a bright, limitless future except that they lack educational opportunity, support, and guidance. So much begins with education, and Duncan admonishes us to bet on the astoundingly transformative power of good teachers.