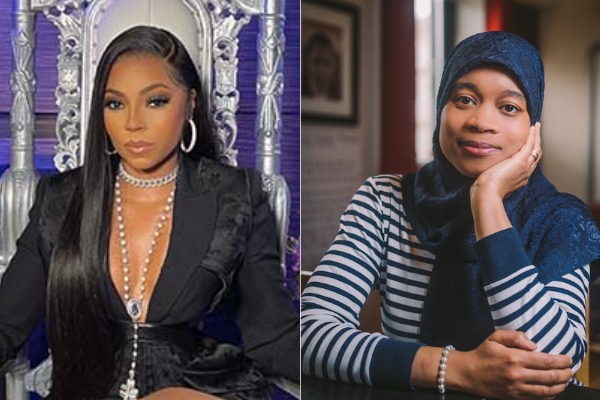 Singer Ashanti is gearing up to expand her ventures with a children’s book celebrating the beauty of unique names. There’s a small hiccup: she’s accused of stealing the entire book’s concept.

“I’m so excited to finally share the news that my debut picture book MY NAME IS A STORY comes out on July 19th,” Ashanti shared in a lengthy caption on Instagram. “Inspired by my own experiences, I wrote this book to remind children that every name is special and deserves to be honored and celebrated.”

However, shortly after Ashanti’s announcement, Philadelphia author Jamilah Thompkins-Bigelow accused her of seemingly copying her children’s book, Your Name is A Song. On Twitter, Thompkins-Bigelow, posted a side-by-side showing how much the two book covers resembled each other.

“My heart hurts…is Ashanti ripping off my book? Ashanti’s is on the left. Here’s mine on the right, published with @InnovationPress” Jamilah wrote in a tweet captured by The Jasmine Brand.

Jamilah went on to post screenshots of the synopsis for both books, noting how she didn’t want to make “too big a deal” about the title and cover being so similar—until she saw the description for Ashanti’s upcoming debut.

“Inspired by Ashanti’s own experience, this poetic celebration shares the joy that one child finds in her name and reminds us to honor all the different names,” Ashanti’s book synopsis reads.

“Your Name is A Song is a celebration to remind all of us about the beauty, history, and magic behind names.”

Jamilah recalled her two-year journey to find an agent and get her book published only “for some celebrity who probably didn’t even write it to just steal my idea. I am shaking,” she wrote.

Thompkins-Bigelow shared how much “worse” it got after she learned even more information about the possible plagiarism.

“Just know, I went to bed in tears and wondering if I even want to stay in this industry,” she tweeted. “I am devastated by the lack of ethics and cynicism. So devastated.”

Ashanti and her publisher have remained silent so far on the plagiarism accusations.