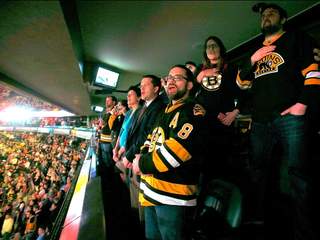 Fans at the Bruins game Wednesday night sang an emotional version of the national anthem.

The sports world has responded en masse to the events surrounding a pair of blasts that went off near the finish line of the Boston Marathon on Monday afternoon. At a Boston Bruins game at the TD Garden, fans joined in on a stirring rendition of the national anthem. Sporting events all over the country recognized moments of silence for the victims of the bombing.

Thursday, the president spoke at an Interfaith service in Boston.

PGA golfer James Driscoll, a Boston native, started Birdies for Boston, in which he’ll donate $1,000 for every birdie that he makes at the RBC Heritage at Harbour Town Golf Links, Hilton Head, SC, and at the Zurich Classic of New Orleans at TPC Louisiana.

“As soon as I heard about it, I immediately thought of all my friends,” Driscoll told PGATour.com. “I had friends running it and a lot of other friends there watching it. I knew they were all going to be there on Boylston Street. Fortunately, everyone was OK.

“But, it makes you angry, emotions just flow,” he said. “I decided I wanted to do something.”

New England Patriots defensive back Devin McCourty attached his donations to tackles made.

He was referring to teammate Danny Amendola, who said he would donate $100 per catch to victims. He had 85 catches in 2010.