How One Atlanta Company Uses Tech to Connect People With Policy 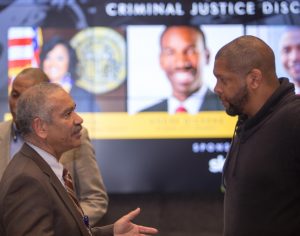 Whew! The 2017 Georgia legislative session ended March 30. This was my seventh regular legislative session, and this session was particularly brutal. And, dare I say, even though the Georgia constitution only allows us to meet for up to 40 days, this year seemed like a lifetime!

Citizens in Georgia Use Technology for Advocacy

But, there were moments I found encouraging, as thousands of Georgians rallied around what they believed (and what I agreed) to be bad legislation this year. This advocacy is one of my favorite parts of being elected: seeing political activism from citizens concerned about their government. Georgians engaged using non-traditional avenues and technology, to let their voice be heard, and I couldn’t be more proud as a legislator.

That being said, it gives me great pleasure to introduce a young man that is using technology to connectÂ policyholdersÂ and issues to everyday citizens. Horace Williams is a young man with a vision and background to make civic activism “cool,” and inspire a generation to action. Did I mention he decided to start his company in my hometown of Atlanta, Georgia?

Dar’shun Kendrick:Â Tell me a little bit about yourself and your background. What caused you to first get interested in technology?

Horace Williams: I am originally from Brooklyn, NY, but Â I went to North Carolina A&T when I was 17. I graduated when I was 20, and then moved back to New York City. I livedÂ betweenÂ BrooklynÂ and the Bronx for a few years, and during this time, I wasÂ self-employed. I co-owned a web application shop with my cousin, who wasÂ a developer.Â As aÂ designerÂ by trade, IÂ combined our talents and built a business. Â I worked from

I worked fromÂ 1 a.m. toÂ 9 a.m. as a dispatcher for the Red Cross to supplement my income. Additionally, IÂ consulted with a small tech company, which ultimately led me into the next chapter of my life. I ended up joining that small tech company full-time in 2006. A year later, another company in Atlanta called Vitrue acquired the company, and I moved to Atlanta. Close toÂ four years later, Vitrue grew into a very successful company. It wasÂ acquired by Oracle, where I led the user experience for our division for three years. Â I left in November of 2015 to startÂ EmpowrdÂ Apps L.L.C.

My interest in technology is absolutely a result of myÂ mother’sÂ influence. When I was a child, sheÂ would regularly bringÂ home computers from her job that were no longer being used. Â Back then, throw-away computers from corporations were better than what most people could buy new or afford. I would use the computers to make simple graphics, type, [and] try to teach myself code, but generally, I used it to facilitate my creativity. Consequently,Â I couldn’t get enough of computers.

The technology path I ultimately choseÂ was design,Â which was the result of my father’sÂ creativityÂ and love of design. He wasÂ a FashionÂ Institute of Technology (FIT) graduate, who ended up worked at Pratt Institute in Brooklyn for decades, until he retired. I guess, you could say that I was lucky enough to have always been surrounded by creativity and technology. I just decided to merge the two.

DK: Why the name “Empowrd?”

HW: I choseÂ EmpowrdÂ because it’s simple and powerful. I wanted a word often used in our space that also represents how I want people to feel after using products I create. I knew that no matter what path I tookÂ EmpowrdÂ down, I would never be satisfied with any business pivot that did not enhance the lives of people who used my product. It also provided me the ability to be open minded, yet focused on an end result of empowerment. I spelled it differently, so I could keep the phonetics, yet still secure the trademark, URL, and unique appeal necessary for mass adoption in today’s marketplace.

DK: Why is it important for minorities to be involved in theÂ policy-makingÂ process and get connected with their elected officials?

HW: Policies created and enforcedÂ at theÂ local, state, and federal levels derive from the those who actively participateÂ in the process. YourÂ absence in the process doesn’t stop or protect you from the creation of aÂ policyÂ that impacts your quality of life.

Minorities have the ability to bring their communities together in powerful and large groups. I have both seen and been a part of it, in cases of celebration and protest. So, why not activate those same groups to influence the creation ofÂ policies, or get one of your peers elected to office? Then, you can continue to support and hold that person accountable. It doesn’t take as much as people think–especially if you focus on local policy, like state legislation or even city ordinances. In some cases, both of theseÂ can even insulate your community from federal agendas you may not personally agree with.

Then, once your feel good about your community, leverage the small wins to build momentum and drive bigger policy changes to a wider range of issues. I’ve always felt strongly that those who are passive or apathetic in a democratic society are subject themselves to dictatorship. Because, in reality, policies cannot represent your best interests, if the creators of those policies don’t know you exist.

DK: How does this relate to economic justice in our community?Â

HW: One example is that there are several policies and pieces of legislation that directly or indirectly impact small businesses, which are at the core of many minority communities.

I was recently a speaker at a political event solely focused on the beauty industry–hair salons, barbers, cosmetics, and so forth.Â Even I was surprised to see how much local policies and state legislation impact the costs of operating a business in the beauty industry. This is important, because some regulations keep your industry safe and credible, while others make it too costly to operate for profit. As aÂ constituent, you don’t want to just be susceptible to these rules. You want to have a seat at the table when they are being made, because those who are benefited are the ones who are engaged.

DK: Do you have any other comments or ways to support what you are doing?

HW: EmpowrdÂ is all about finding several ways to get people engaged in the political process. Everything we do is focused on bridging the gap between the people and those who govern them.

If you follow EmpowrdÂ Apps on social media (@empowrdapps), you will have access to our continuously growing database of civic facts and educational material. If you are in Georgia, and download theÂ EmpowrdÂ app, you will gain access to the contact information for all of your local, state, and federally elected officials, simply by enteringÂ inÂ your address.

We also do a monthly event, here in Atlanta, called “The Power ofÂ Empowrd,”Â at The Gathering Spot, where we introduce local residents to the local elected officials. OurÂ one this month is April 13, and we will bring in elected officials that represent us within the education system. Like us on Facebook or Instagram for details and to R.S.V.P. Remember, all of our events are free!

Need I say more about the POWER ofÂ Empowrd? Do yourself and your community a favor, and connect with EmpowrdÂ Apps online. Start advocating. Start voicing. Continue to rally. Continue to ask questions. It’s the American way–andÂ EmpowrdÂ is here to help.

Dar’shun Kendrick is aÂ  private securities attorneyÂ and owner ofÂ Kendrick Law Practice, helping businesses raiseÂ capital the LEGALÂ way. She has two B.A.s from Oglethorpe University, a law degree from the University of Georgia, an M.B.A. from Kennesaw State University, and works with “for profit” companies seeking to raise $250,000 or more through privateÂ capital. Additionally, she’s been elected to the Georgia House of Representatives , representing East DeKalb and South Gwinnett counties since 2011. She serves on the committees of Juvenile Justice, Interstate Cooperation, Judiciary Non-Civil, and as the ranking Democrat on the Small Business and Job Creation Committee. She’s also co-chair of the Georgia Legislative Black Caucus Economic Development Committee; a board member of the Technology Association of Georgia’s (TAG) corporate development board; and the founder and board chair of the nonprofit, Minority Access to Capital, Inc. Its mission isÂ to educate and empower minorities about how to grow their companies and create generational wealth.Â Furthermore, she is an economic justice advocate and owner of Kendrick Advisory and Advocacy Group, L.L.C., Â providing consulting and advocacy services on policy and initiatives for minorities across the nation.