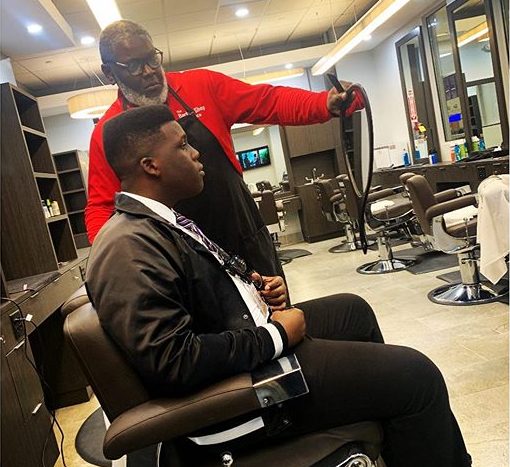 This isn’t Gilbert’s first barbershop. In fact, he’s been in the business for more than 10 years. His first barbershop is located at North DeKalb Mall in Decatur, Georgia, and is well known in the area.

What’s impressive about the Barber Shop Atlanta is its historic place in America’s busiest airport. According to BlackBusiness.com, Hartsfield-Jackson International Airport serves a little more than 100 million passengers each year and since 2009, it has been wanting to open a black-owned hair salon and/or barbershop. Unfortunately, this plan never seemed to see the light of day and according to BlackBusiness.com, it really didn’t “work out for other operators.” That is until Gilbert’s barbershop was chosen out of four other applicants who applied to open their own shops in the airport in 2014.

As Gilbert said during an interview with The anta Journal-Constitution, “I’m just glad to be open. We had to go through a lot.”

Indeed, the journey to this barbershop was a difficult one. It took more than five years of delayed and complicated planning and construction for The Barber Shop Atlanta to finally open. There were challenges to building in a working airport, specific restroom requirements had to be met, and construction could only be done at night.

The Barber Shop Atlanta is located in the North Terminal Atrium next to TGI Fridays and is open 17 hours a day according to BlackBusiness.com. The barbershop has 12 seats and a VIP Suite, according to the Atlanta Journal-Constitution, and offers a large variety of services such as both men’s and women’s haircuts, shaves, styling, perms, facials, and even massages.